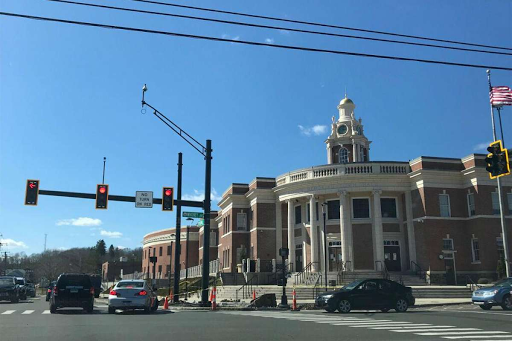 HAMDEN CT April 25 2021— In the wake of a disagreement over a plan to hire security guards for COVID-19 screenings, Hamden’s town buildings have begun reopening to the public.

Last spring, Hamden joined municipalities across the state and closed the doors of its government buildings due to the threat of COVID-19. But as other town halls and libraries reopened with restrictions, Hamden’s remained shut.

When asked about the lengthy closure, Mayor Curt Balzano Leng issued a statement suggesting the town never missed “so much as a day of essential services.”

The food bank did not stop operating; police, fire and public works continued to do their jobs, he said.

“Many departments adjusted how they do business, but provided effective service under tough circumstances,” Leng continued.

This spring, town buildings at last looked to reopen their doors to in-person visits. In early April, the Hamden Public Library announced it would allow limited browsing hours at its main location starting early this week.

But that plan was put on hold Monday after the Legislative Council’s Finance Committee rejected a $24,000 proposal from the administration to hire security guards to monitor building entrances. While stressing the importance of the reopening, council and committee members did not think security guards were a necessary part of it, according to meeting footage available on the town website.

“I don’t think we need it. I think this is spending that is not necessary,” Chairwoman Kristin Dolan told her colleagues, adding she also did not support use of a bid waiver.

The administration’s proposal would have issued a bid waiver to hire the East Haven-based firm Investigative Consultants LLC to post guards at the entrances of the Keefe Community Center, Hamden Government Center and the Miller Library Complex, according to a memo from the mayor.