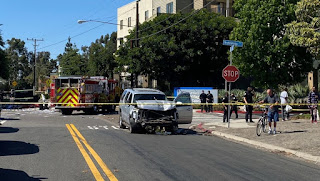 Long Beach CA June 13 2021 At 3:09 pm on Saturday, an Long Beach police officer and Fire/EMS were dispatched to the 2000 block on San Gabriel Avenue for the deaths of adult men who had been injured in a hit-and-run crash.

Upon arrival, police officers discovered that the vehicle had collided with a guard’s shack and the driver then attacked the guards inside.

Fire department personnel continued to implement life-saving measures, but the security guards were injured and killed at the scene according to police.

Preliminary investigations revealed that the 2012 Chevy Tahoe was driving at high speed when the vehicle struck guards’ shack, which was occupied by the guards at the time of the collision.

The Chevrolet Tahoe driver later fled the area before police arrived and has not been apprehended.

The Los Angeles County Coroners Office responded to the scene and one security guard has been identified as a 54-year-old Delix Miss in Los Angeles.

If you have information about the collision, please contact Detective Kelsey Myers or Detective Sean Laughlin for collision investigation details at the Long Beach Police Station. (562) 570-7355..

“We are deeply saddened by this tragic event, and we are cooperating fully with the Long Beach Police Department in their efforts to identify the driver,” said Steve Colman, executive director of Century Villages, which offers housing and other services for veterans, seniors and families.

Alone and left to die. 3 Security Officers in Nine Weeks