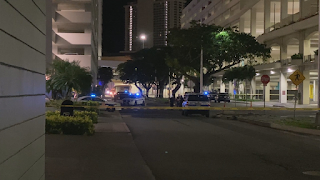 According to police, officers responded to a report of male stabbing another male in front of a bus stop at the intersection of Kona St. and Kona Iki St. shortly after 10:30 p.m. When they arrived at the scene, a male told them he had been threatened with a knife by another person who was seen walking away.

Police identified the 48-year-old man holding a knife and said they repeatedly told him to drop it.

“But the suspect refused,” said HPD interim police chief Rade Vanic. “The suspect then ran towards the officers with the knife raised in the air. Two officers fired at the suspect, striking him multiple times.”

Vanic said the suspect was possibly shot in the arm and torso, but details have not been released while the investigation unfolds. Bodycam footage is being reviewed.

A female security guard who was standing approximately 30 yards away was hit in the leg by one of the bullets that may have ricocheted off another object. Vanic described her injury as “superficial” since the bullet didn’t break through her clothing. She was treated at the scene and released.

Vanic said officers at the scene administered first aid to the suspect until Emergency Medical Services (EMS) arrived. The suspect was then transported to the hospital where he remains in critical condition.

While he has not been arrested at this time, an arrest warrant for three counts of first-degree attempted murder is being prepared. He has one prior felony conviction for criminal property damage.

The two officers who discharged their firearms have one and two years of service.

One is on administrative leave, and the other is on his scheduled days off.