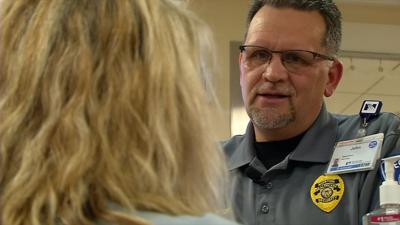 LOUISVILLE, Ky January 13 2020 A hospital security officer finds himself as a patient in the same emergency room he works to protect.

John Fremow said he was born to protect and serve.

“I was in the National Guard, was a Desert Storm veteran, was over in the Persian Gulf War,” Fremow said. “I served 21 years at Louisville Metro Department of Corrections.”

Now, at age 52, he is working as a security officer at Norton Brownsboro Hospital.

“It’s very important that we’re here to ensure the safety of everybody — staff, visitors and patients,” Fremow said.

As a physically fit and healthy man, Fremow never imagined he would come through the hospital doors as anything other than an employee.

“Don’t we always say that about ourselves?” Fremow said. “That it’s never going to happen, and your life can change in the blink of an eye.”

Shortly after starting the new job, he went from hospital security officer to patient.

“Dealt with a lot of things, a lot of close calls in my life,” Fremow said. “This was the closest.”

“I was at home watching TV with my girlfriend and started to feel a little woosy and tried to say something and it didn’t come out right,” Fremow said.

Next thing he knew, he was on the floor, and his girlfriend was calling 911. It just so happened, Fremow said, that an ambulance was down the road to get him to the hospital just in time.

“I was able to get here within the golden hour,” Fremow said.

“When I met him he was what we call hemiplegic, not moving the left side,” said Yao, who worked with his team to remove a clot from Fremow’s brain.

“What they did to save me is why I’m here talking to you,” said Fremow, who credits the doctor’s work and time for saving his life. The experience helped formed an even stronger bond between the security officer, nearly fully recovered, and hospital staff.

“It’s indescribable,” Yao said. “Every time I see him going down the hall it’s just amazing. It never gets old, like we still smile at each other.”

Fremow said he now walks the halls with a new appreciation for the staff and a new perspective on life.

“The saying, ‘Live everyday like it’s your last’ — that couldn’t be more true for me,” Fremow said. “You know, everybody tells me, ‘I think God has plans for you.'”

Fremow believes one plan is to share his story in hopes of saving lives.

“It’s very important that you know the symptoms of a stroke. Just remember the acronym BE FAST. B for balance, E for eyes, F facial, A arm, S speech and T time. Remember time is very important.”

In no time, Fremow said he was back to work two to three weeks after his stroke.