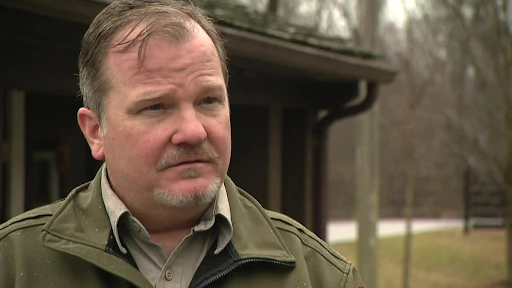 INDIANAPOLIS, IN. January 26, 2022, A state park security officer in Indiana says his gut instincts pushed him to rescue an 8-year-old girl from a potentially dangerous situation.

He spotted a black Cadillac with a headlight out and a young girl in the back seat. The driver told Foy he needed a campsite and some gas to get there.

“I looked at my truck temperature – it was 16 degrees outside,” Foy explained. “So, it’s pretty cold and I was like, you know it’s pitch black. Really, I was ultimately worried about the little girl in the back seat. It’s so cold.”

Foy said he noticed some red flags as he talked to the man in the car.

“He got out and then he put on a pair of sunglasses right after he got out and it’s pitch black out. And I thought, well this is just an odd situation. Things didn’t add up,” Foy said.

When the little girl wouldn’t talk to him, Foy got worried and called conservation officers.

“I tapped on the glass trying to talk to her. She wouldn’t turn around, wouldn’t answer me. So, I got some gas, took him to a campsite,” Foy said.

When they arrived at the campground, conservation officers realized Foy’s instincts were right – something was wrong.

According to prosecutor Ted Adams, the driver of the car, Daniel Eggers had been on the run with his non-custodial daughter for five months.

“Mr. Eggers has pending charges for abduction or concealment of a child,” Adams explained.

Deputies arrested Eggers in the park Friday night, and the little girl was safe and able to head home.

“Kudos to law enforcement. Kudos to who’s ever Spidey Sense was out there to make it, you know, something wasn’t right,” Adams said.

“I just encourage everybody to trust your gut. You know, really, if something doesn’t feel right, it’s probably not right. And so, say something,” Foy said. “I was really happy that the girl got rescued, you know, and that she’s going to be on her way back home where she should be.”

Eggers pleaded not guilty during his initial hearing Monday. He’s being held without bail and will be taken back to Nevada to face charges.