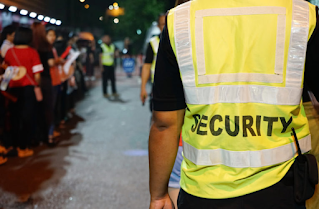 Samuel Bush still can’t get the images out of his head.

“​All I can think about is those deaths,” he said.

The morning of Nov. 5, the 46-year-old arrived at NRG Park in Houston to work security at Astroworld Festival, a sold-out concert hosted by rap superstar Travis Scott. Bush found out about the job from his nephew Jackson, and he was excited to be there. He had no idea he would watch people fight for their lives and leave with broken bones himself.

Ten people were killed and hundreds injured after the crowd surged forward during Scott’s performance, crushing concertgoers near the stage. Samuel Bush became emotional as he recalled walking by a woman crying and saying she couldn’t breathe.

“I was trying so hard to pull this young lady out, and I couldn’t,” he said.

Hours before the tragedy, security officers realized Astroworld Festival could become dangerous. Samuel Bush was hurt in a stampede after hundreds of fans ran past security and rushed the entrance gates. He recalls the crowd trampling him and realizing that his hand was injured. Samuel went to a medical tent, and they gave him an ice pack. The next day, he found out he had broken bones in his hand. About 3,000 to 5,000 concertgoers made it into the festival illegally.

“It was way out of control,” he said. “It was way too much for us to handle.”

Samuel Bush and his nephew, Jackson Bush, are suing AJ Melino and Associates, the global security company that hired him for the festival. AJ Melino and Associates has provided security services for big festivals and events and lists Nike, Viacom, and the NBA as clients. These men allege that security guards weren’t adequately trained or provided a safe place to work for the event. Nearly two weeks after the festival, Samuel and Jackson Bush still haven’t been paid for their work. The Cochran Firm Texas is representing them in a lawsuit to be filed in Harris County District Court against their employer and other responsible entities.

“They went above the call of duty of what they were asked to do of being crowd control to become rescue workers,” said Larry Taylor, attorney at The Cochran Firm Texas. “It’s really sad that these organizers have not paid these men and women.”

More than 100 lawsuits have been filed since Astroworld Festival, including a $750 million lawsuit on behalf of 125 plaintiffs. Defendants include event organizers Live Nation and Apple, the Harris County Sports & Convention Corporation that oversees NRG Park, Travis Scott, and Drake, a surprise guest at the concert.

Many of the plaintiffs in these cases are event attendees, but festival staff may also have grounds for legal action. Scott has a history of encouraging fans to behave recklessly and boasted in a now-deleted tweet about “sneaking the wild ones in” after Astroworld Festival quickly sold out.

According to Houston Fire Chief Sam Peña, 528 police officers and 755 private security officers were present at the festival, along with paramedics provided by a third-party company. Even with the heavy emergency presence, the response was chaotic once it became clear that there was an urgent situation. The Houston Fire Department had no way to communicate with the private medics on the scene. Video footage shows police filming the concert even after officials declared a mass casualty event. Even the hiring process for security ahead of the festival was disorganized.

Jackson Bush found out about the need for security guards the day before the event when he saw a friend’s Instagram post asking if anyone was interested in working the festival. After he expressed interest, he was hired via text message and told he’d be paid via Cash App. Jackson told his uncle, Samuel, about the gig, and he was also hired. They were asked to show up in all black but given no further instructions by AJ Melino and Associates.

“There was no training,” Jackson Bush said. “There was really no organization, either.”

He felt unequipped to help with the life-or-death emergencies he witnessed at the festival. He recalled doing his best to pull people out of the crowd. At one point, Jackson saw a lifeless body at his feet. Astroworld Festival was scheduled to last all weekend, but organizers canceled the second day after learning about the concert deaths. No one told Samuel or Jackson, so they showed up to work the following morning only to see signs that the event was no longer happening.

Both men haven’t been able to stop thinking about what happened that night. Samuel Bush said he still can’t wrap his mind around people showing up to a concert to have fun and not making it out alive.

“We feel for all the families and the ones who lost loved ones,” he said. “That could’ve been us.”