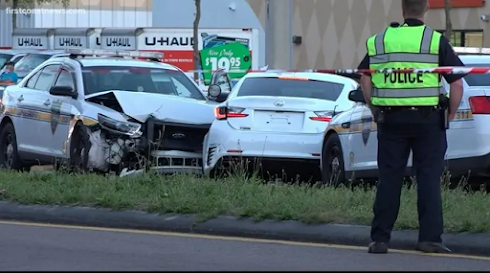 Court records identified a 21-year-old Westside man as the suspect in Wednesday’s credit union robbery that led to a police chase with gunfire before ending in a crash into a pickup with a grandfather and child inside.

Dontravious Devon Adair of Preston Pines Trail was arrested on charges of attempted murder of a police officer, armed robbery, shooting deadly missiles, fleeing an officer and reckless driving, according to his arrest report.

The Sheriff’s Office did not release his booking photo.

Officers were called just before 4:30 p.m. to the VyStar Credit Union at 7795 103rd St. after reports of a man in a green hoodie holding the security guard at gunpoint and pointing a rifle at others, the report said.

The suspect’s description matched that of an armed robbery earlier in the day.

Officers arrived as the suspect walked out with a rifle in one hand and a pistol in the other before driving west on 103rd Street in a white Lexus. That Lexus had been stolen just before 1 p.m. the same day from a dealership at 7040 Blanding Blvd., another police report said. That suspect also was wearing a green hoodie.

Officers followed the car as it swerved in and out of traffic, with shots being fired at them, none of whom returned fire, Sheriff’s Office spokeswoman Cheyenne Snyder said. Two miles west of the credit union, the driver jumped the median and hit the pickup with the grandfather and 8-year-old granddaughter inside, the arrest report said.

A pursuing police car crashed into the driver’s door of the Lexus as another pulled up behind to box the suspect in before he was arrested, police said.

All the injuries were non-life-threatening, Snyder said.