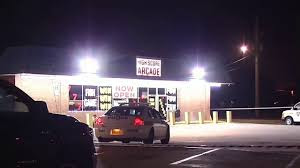 The robbery took place at High Score Arcade on North Edgewood Avenue just after 2 a.m. When officers arrived, they found the security guard was shot during the robbery.

Investigators said the two robbers — a man and a woman — then ran off.

The security guard was transported to a local hospital, where he died.

This was the fourth robbery of High Score already this year and a person were just outside the arcade last September.

Jacksonville’s businesses are no strangers to violence as a result of robbery attempts. A man was shot and killed May 2 during a robbery at the Dream Arcade on Edgewood Avenue. A robbery at the Lucky Charms Arcade on Mayport Road in January led to a kidnapping and crash in which an 84-year-old man died.

Two security officers at arcades were involved in shootings last year. In December, a guard was shot during the robbery of the Cyber Spot Game Room on 103rd Street.

In March 2018, a security guard shot and killed two robbers at the Spin City Sweepstakes Internet Cafe on Beach Boulevard.

The High Score Arcade does have legal permits and is able to remain in business for another five months — unless there is an extension.