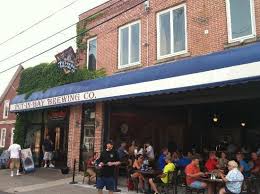 PORT CLINTON OH October 22 2019 — A jury ordered a Put-in-Bay company to pay a Pennsylvania man $4 million for injuries the man suffered at the hands of a bar’s bouncer in 2017.

An eight-person Ottawa County jury made the ruling against Brewery at the Bay, which owns the Mojito Bay Tiki Bar in Put-in-Bay, on Friday afternoon at the end of a multi-day civil trial in the Ottawa County Common Pleas Court. The $4 million award will go to the victim, Somerset, Pennsylvania resident Zachary Hoffman.

Hoffman was at Mojito Bay with friends when a bartender asked him to leave, according to the plaintiffs’ complaint.

Hoffman was leaving the bar without resisting when a bouncer put him in a headlock and “slammed” him to the ground, Murray said. The bouncer, who the plaintiffs said weighs more than 300 pounds, then fell on top of Hoffman, breaking his humerus bone in his upper arm, which required hospitalization and surgery.

Murray said the damage done to his client’s shoulder and arm is permanent.

“My client is an asbestos worker and can’t do the job he used to do,” he said. “He has very limited use of his dominant right arm.”

Murray said he was happy with the trial’s outcome.

“We just feel very, very grateful to jurors and to the system so Hoffman doesn’t haven’t suffer, economically at least,” he said.

Jim Hart, a Sandusky attorney of the Flynn, Py & Kruse firm, who represented Brewery at the Bay, declined to comment on the verdict.