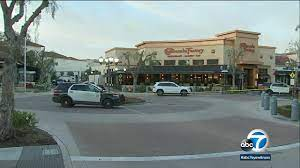 Aman accused of attacking a deputy has died after he was shot by that Los Angeles County Sheriff’s Department deputy Wednesday night in Valencia.

The shooting happened around 11 p.m. outside the Macy’s department store in the Westfield Valencia Town Center, according to the department. Deputies had responded to the scene regarding a call about a trespasser.

Authorities said the suspect attacked one of the deputies, prompting them to open fire.

The man, who has not been identified, did not appear to be armed with a weapon, officials said.

He was taken to the hospital, where he was later pronounced dead.

The deputy was also transported with injuries to the face and was later released.

Further details about what led up to the shooting were not available. The Department of Justice responded to the scene and will be handling the investigation.