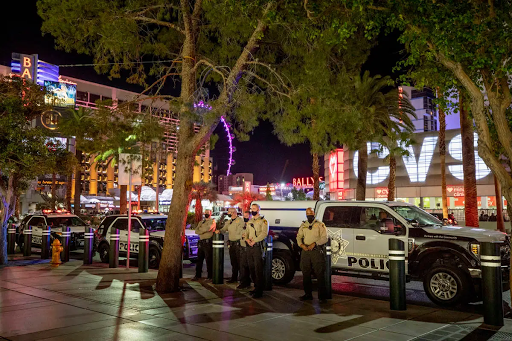 Las Vegas NV January 10 2021 Las Vegas police arrested more than 1,200 people on the Strip during a three-month operation to curb violence in the area.

Metropolitan Police Department’s Convention Center Area Command arrested 1,229 people around the Strip and confiscated 64 guns from the area during Operation Persistent Pressure, which ran overnight every Friday and Saturday night from Sept. 18 to Dec. 20, according to Metro Capt. Dori Koren.

The charges included disorderly conduct, assault, battery, robbery and illegal shooting, Koren said, citing that 36 percent of all arrests were for felonies or gross misdemeanors.

“Violent crime on and around the Las Vegas Strip began to rise significantly in September,” Koren said in a statement Friday morning. “The primary driver for this activity was related to a sharp rise in firearm-related incidents and aggravated assaults (i.e., shootings).”

The Review-Journal previously reported on a large fight at Encore at Wynn Las Vegas on Sept. 6; a pistol-whipping at Caesars Palace on Sept. 18; a stabbing Sept. 30 near the Bellagio; and five shootings throughout the month.

In an October interview, Clark County Sheriff Joe Lombardo told the Review-Journal that Metro was increasing the presence of undercover officers with the assistance of the Department of Homeland Security and working on being omnipresent.

“On a regular basis, especially during the bewitching hours of late Friday nights and Saturday nights, we bring a lot of resources throughout the Police Department to bear within that Strip corridor,” the sheriff said at the time. “So we have an omnipresence, police officers in uniforms, spread out through the corridor, so we can have quick response if we do observe anything and be proactive.”

Lombardo cited Operation Top Gun, a 30-day plan prior to Operation Persistent Pressure that led to the confiscation of 64 guns from the Strip. Lombardo said 55 percent of arrests made by Las Vegas police on the Strip during those efforts involved people from out of state.

Koren said Friday that the number of shootings decreased 54 percent from October to December, and police also observed a decrease in the number of robberies and sexual assaults in the Strip corridor.

“This initiative was based on a collaborative effort of proactive policing and crime prevention that involved nearly every component of the LVMPD,” Koren said. “Likewise, LVMPD’s partners — to include those in casino and hotel security, the Nevada Highway Patrol, and the Clark County School District Police Department — played a vital role in advancing this operation.”

“We are still maintaining our progress by using our existing area command resources, and we are also constantly evaluating what other new efforts need to be made to continue improving the safety and quality of life on the Strip,” Koren said.