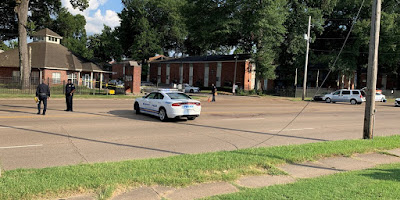 CHARLOTTE NC AUGUST 21 2019
Fatal shootings by private security officers continue to rise and two more happened overnight.
In Memphis TN, an apartment security officer shot and killed a man at the Villages of Harrison Creek Apartments after an argument around 5 p.m. Tuesday evening.
The apartments are at Jackson Avenue near National.
Residents were kept outside the complex as police investigated.
Police say at this point it is not clear exactly what the argument was about, but it ended with the security guard shooting the man.
He was transported to the Regional Medical Center where he died.
It is not clear if the man who died had a gun on him or retrieved it.
The security guard stayed on the scene.
Police are questioning the security guard, but he may not face any charges.
A second fatal shooting was reported in L.A. County where a security officer confronted a man breaking into a vehicle at an apartment complex.
Police are still on the scene at this hour.
On Saturday, August 17th, a security guard was arrested for shooting two patrons of a nightclub in Jackson MS after he became involved in a verbal dispute with them.
Five other lethal use of force incidents occurred just last week when security officers defended themselves against three armored truck robberies and robberies of two businesses.
Another fatal shooting by a security officer was reported on Sunday, August 11th of this year, when a security officer at a nightclub shot and killed a woman who had shot a customer at the club.
The security officer stated that the women refused to drop her weapon and he fired his weapon to defend others. He said that he had no other choice.
There were 103 incidents involving security officers using lethal force last week alone.
In 2018, Private Officer International tracked more than 6800 incidents of lethal force used by private security officers including 147 fatal shootings.