‘Life is not a video game:’ Man arrested for hopping airport fence, trying to board jet 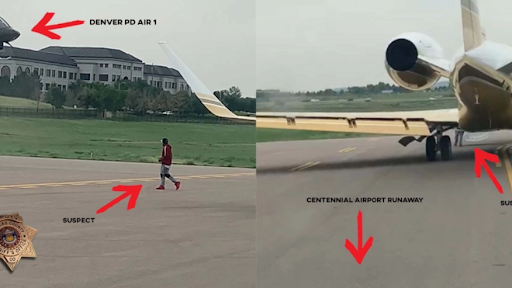 CENTENNIAL, Colo. July 21 2021 Deputies said it looked like a scene from a “Grand Theft Auto” video game when a man hopped the fence at Centennial Airport and tried to board a Gulfstream jet taxiing on the runway.

Sterlin Antonio Love, 31, was arrested after the Wednesday incident, which took place around 1:15 p.m.

According to the Sheriff’s Office, Love jumped the airport’s south fence and began to approach the jet. Love then tried to board the plane, but the crew shooed him off.

On social media, police reminded potential copycats that “life is not a video game.”

“Jumping a fence at Centennial Airport in [an] effort to steal a jet and fly to Hawaii will not go well,” police wrote.

A Denver-area sheriff’s department was the first to respond to the scene. A Denver Police Department helicopter also happened to be at the airport on an unrelated matter, and responded in the chopper.

It was ultimately determined that Douglas County, just south of Denver, had jurisdiction over the matter. Deputies took Love into custody.