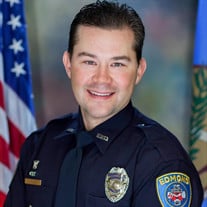 Sergeant CJ Nelson was killed when his police motorcycle was struck by a utility truck on Broadway Extension at Comfort Drive at about 3:00 pm.

The utility truck was driving at a high rate of speed when it struck Sergeant Nelson’s motorcycle and several vehicles that were stopped at the light. Sergeant Nelson was transported to a local hospital where he succumbed to his injuries.

The driver of the truck was charged with manslaughter and second-degree murder.

Sergeant Nelson was one-day shy of his 13-year anniversary with the Edmond Police Department. He is survived by his wife, daughter, and son.