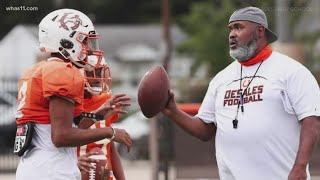 Davie’s family said he collapsed after gym duty at the school Friday.

He was taken to the hospital, where he later died.

Student-athletes said Davie will be remembered as a mentor and role model that they say believed in them more than anyone else.

“Every time you would get a dunk he would always jump out of his seat screaming and yelling, hyping us up,” senior Tony Moss said.

Davie served as an assistant coach at Doss for four seasons, always ready to give his all to help each kid grow.

“He was working for a different company, but about three years ago he left to get into the school system full time because his passion was around kids,” head basketball coach Blake Stone said. “He made that commitment even though he took a pay cut.”

Before coming to Doss as a coach and security guard, Davie coached kids at a non-profit called Louisville Magic.

“He was a really nice guy, always came up to me after the games, told me how good I was, how much better he thinks I could be and just gave me tips about almost everything,” former Louisville Magic player Hagan Harrison said. “He was just a great person and made everybody feel like they’ve known him forever.”

Some of the kids he coached through the Magic are in high school now, pursuing what they love in part because of Davie.

“I remember he always used to tell me play better defense, move your feet and it always clicks in my head to always do those things,” former Magic player Cameron McClain said.

Friends and mentees flooded social media with messages and photos to honor the 37-year-old once the news was announced, telling stories about how kind and helpful he was.

“Last season we struggled over at Doss getting them team meals, but the last meal of the season [Davie] bought it with his personal money,” Stone said. “He told me don’t tell the kids, but it was the most expensive meal they had all year and he told me that was the first time in his life he was able to buy a team meal so it just it really hit home when that happened.”

JCPS announced the news to parents, students and staff through an email Monday. Davie leaves behind a wife, six sons and one daughter.