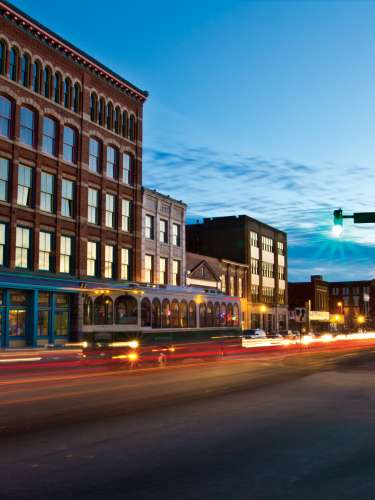 MACON, Ga. Dec 26 2020— Josh Rogers with NewTown Macon says on an average Friday or Saturday night, there could be up to 7,000 people downtown. According to the Bibb County Sheriff’s Office, they typically have two deputies assigned to patrol downtown.

However, depending on schedules, who’s sick, or who’s training, there could be just one. At least two days of the week, Captain Brad Wolfe over the Patrol Division says deputies from other districts have to step in to patrol downtown.

“Downtown District, the way their schedule works, Sunday, Monday are their off days, so the downtown district is absorbed by two other districts, so they’re not down there as much as the downtown guys would be,” Wolfe said.

On Mondays, they have a lieutenant downtown who can respond to calls.

On the night of the Cherry Street shooting in November, Wolfe says one deputy was assigned to downtown but had to respond to a call in south Bibb. As we’ve previously reported, Bibb County Sheriff’s Office say the deputy responded in 7 minutes from the time he was dispatched.

Wolfe says this all has been the normal schedule since 2014.

“About a year ago, we really noticed nightlife was taking off like crazy,” Josh Rogers, President and CEO of NewTown Macon.

NewTown Macon got advice from outside experts, the Responsible Hospitality Institute.

“Their suggestion early on was an interim solution to go ahead and hire extra security personnel,” Rogers said.

Since around 2018, NewTown has had day time safety ambassadors, but beginning this summer, NewTown Macon hired more at night.

“On a typical night, we’re going to have three to five extra security personnel. We’ve ramped up and added an extra security details during the Christmas lights, so that’s running Wednesday through Saturday. Our standard security detail for safety ambassadors for nighttime are Thursday, Friday and Saturday,” Rogers said.

Rogers says these are not armed, commissioned officers.

“So really what we are are the eyes and ears. We want to be the first call so as soon as we see something that may evolve into a security situation, we can get that call into the Sheriff’s Office.

In 2017, owners voted to tack on 5 mills above what the county sets as the base millage rate to keep downtown clean and safe. Overall, the tax dollars rake in around $350,000 each year.

“Almost all of that funding goes into the ambassador program,” Rogers said.

Both Rogers and Wolfe say the downtown district is one of the county’s safest, but Wolfe says the program has helped the Sheriff’s Office.

“I would guess that they know we don’t have the manpower we would like to have, and they know that they are going to have these huge crowds in the holiday, so if they hire those ambassadors and other private security, it’s a little bit, it’s obviously a help to us before we can get there if we don’t have somebody right there on scene,” Wolfe said.

Wolfe says downtown does not have lighter police presence than other districts.

“Because of the size of downtown district, it makes it that it’s all kind of relative. Because the other districts are much larger, and the number of deputies assigned to them,” Wolfe said. “Downtown has as good of a presence as any of  them.”

Bibb County Sheriff’s Office says they have stepped up patrol downtown for the holidays–most of that is covered by deputies working overtime.

NewTown Macon says with this new night program, ambassadors can walk with you to your car, a restaurant, or bar if you call 478-319-6509.