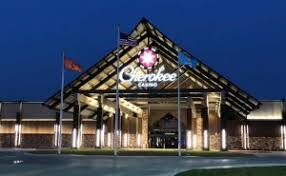 A man was arrested after he caused a disturbance at the local casino by claiming he had a knife that was used in a murder.

On Aug. 19, Cherokee County Sheriff’s Deputy Nick Chute was on patrol at Cherokee Casino Tahlequah when he was stopped by security personnel, who said they needed assistance.

Employees said a man entered the casino carrying a black knife and told the officers it was used in a murder earlier in the day at a hotel.

Chute confronted Tanner Pritchett and asked him to step outside to avoid making a scene on the gaming floor.

“Pritchett was making sudden body movements, was not making any sense with what he was saying, and his pupils were dilated,” said Chute.

The suspect then said there was a woman in the casino who was being held hostage.

Sheriff’s deputies checked the area and could not find a woman in distress.

As Pritchett was being escorted outside, he began resisting officers and was taken to the ground.

He was arrested by deputies after he calmed down.

While he was being transported to the Cherokee Detention Center, Pritchett claimed he was “the cops” and began kicking the patrol unit cage and passenger side door.

“I advised dispatch that I would be running lights and sirens to the jail and to notify the jail that I was en route with a combative male,” said Chute.

Pritchett continued to fight with jail officers and had to be placed in a restraint chair.

The suspect was booked for resisting arrest and public intoxication.