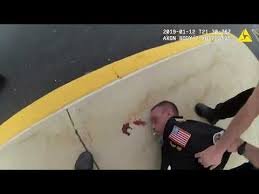 Vineland NJ Jan 31 2019 Vineland police body camera footage of the Jan. 12 arrest of a man who suffered a fractured skull shows he was struggling with police when an officer slammed him on the ground, knocking him out cold.

William “Billy” Oslin, 59, who lives in Vineland, wasn’t expected to survive but finally came out of his coma Wednesday at Cooper University Hospital, according to his son, Paige Oslin.

“Right now, he’s breathing on his own,” Paige Oslin said. His father struggles to speak, he said. “They’re saying it’s a long road ahead. That’s how much damage was done.”

Oslin was arrested on an obstruction charge outside Inspira Medical Center in Vineland for ignoring police orders to stop moving toward his girlfriend, according to authorities. The video also shows that Oslin, who was reportedly drunk, swore at police and was struggling to get out of the grasp of Officer Anthony Capelli when the much-bigger officer swung him to the ground.

The video then shows Oslin lying face down and unconscious, a cigarette still hanging from his lips and his blood on the pavement in the area of his forehead. The officers cuff him while a security guard kneels on his back, and they put on latex gloves as Oslin remains unresponsive on the ground.

One of the officer’s cursed about having to write “another report” and says, “Way to listen, Bill” while cuffing him.

The video shows that the altercation stemmed from a report from an employee that Oslin had assaulted or “almost attacked” a woman in the truck with him when he got to the hospital.

The woman was his girlfriend, Brenda Munyon, who said she was trying to leave him at the hospital so he could detox and get help for his alcoholism. She denied he assaulted her and said they were just arguing, and she smashed a bottle before driving away in the hopes that he would go in the hospital on his own.

When Officer Capelli approached Oslin, he was sitting on a curb and drank from a bottle despite the officer’s order not to. He swore at the staff member who reported him. Capelli told him he should follow the advice of his friend on the phone and get help.

At the hospital to detox, police took him to the ground during an arrest and his skull was fractured.

A second officer, Jeffrey Rowan, arrived on scene, followed by Munyon. When Oslin saw Munyon, the video shows, he stood up and tried to go toward her, ignoring Capelli’s orders to stop and calm down. He swore at the officers and tried to get out of Capelli’s grip before the officer took him down.

It’s not clear when officers or medical staff realized how serious Oslin’s head injury was. Police dispatch recordings show that about 50 minutes after he was brought into the hospital, staff there called the police station and asked that an officer come back to the hospital to unhandcuff Oslin from the bed because he needed a breathing tube.

He was airlifted to Cooper University Hospital that night and underwent surgery for brain hemorrhaging, his family said. He was in a coma for 11 days.