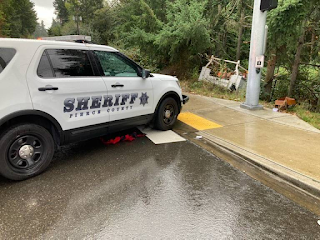 Two men accused of robbing a grocery store Wednesday in South Hill, then leading deputies on a car chase on state Route 512 while weaving through traffic in a stolen truck, have been charged.

A woman who also was arrested for investigation of the robbery has yet to be charged. One of the men involved is alleged to have threatened a security guard with a knife during the robbery by slashing it at her.

A 30-year-old man and a 25-year-old man were charged Thursday in Pierce County Superior Court with first-degree robbery and attempting to elude a pursuing police vehicle.

The younger man also was charged with unlawful possession of a stolen vehicle.

Deputies from Pierce County Sheriff’s Department arrested the three people Wednesday after being led on a car chase that started on state Route 512 and ended after the suspects fled their vehicle at an intersection in Parkland. $2 for 2 months

Deputies responded at about 11 a.m. to a grocery store in the 17400 block of Meridian Avenue East for a report of a robbery.

A security guard at the store told police she saw a man filling a tote bag with items.

According to the declaration for determination of probable cause, she told deputies the man was accompanied by a woman who told the security guard she was “watching the wrong person.”

The man and the woman walked over to the older man who was trying on shoes. According to the probable cause statement, the security guard confronted the older man, who pulled out a black folding knife.

He allegedly slashed the knife at the security guard, telling her “you better back the [expletive] up. You need to move out of my way.”

The guard told deputies she was scared the man was going to stab her, so she backed up.

The three people fled the store and got in a truck, which deputies said had been reported stolen. Deputies caught up with the truck on state Route 512, but the driver continued to flee after deputies turned on their lights and sirens, according to the probable cause statement.

Prosecutors wrote that the truck weaved in and out of heavy traffic on all lanes during the pursuit. The truck exited onto 84th Street South before turning on South Hosmer Street. The driver attempted to turn onto 102nd Street South going east but swung too wide and slowed down, according to the probable cause statement.

Everyone bailed out of the truck before it came to a stop. The woman in the car ran to the middle of the road to surrender to deputies while both men fled. Deputies later caught up with and arrested them.