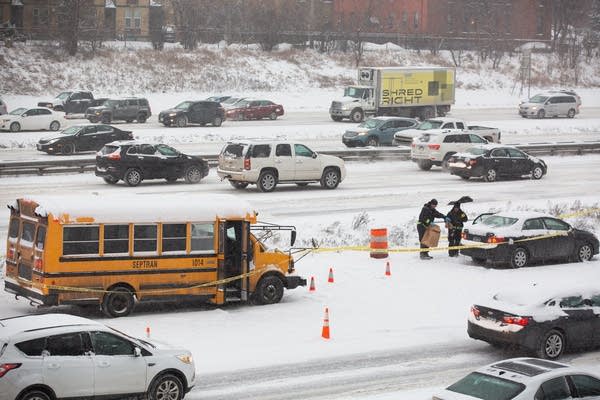 A Hennepin County judge sentenced a 32-year-old St. Paul man to seven years for shooting and seriously wounding a school bus driver on a busy Minneapolis freeway. The only passenger on the bus, an 8-year-old girl, was not hit but continues to suffer psychological trauma.

School bus driver Thomas Benson — who’s in his late 70s — was merging onto Interstate 35W south of downtown during heavy snow on Feb. 5 when his bus scraped Lilly’s car.

Video from traffic cameras shows Lilly, in a security guard’s uniform, stop his car in traffic, walk up to the school bus and attempt to board. Moments later, he moves to the front, aims his 9mm handgun at the windshield and fires five shots. Three of those bullets struck Benson. One split his left ear, permanently damaging his hearing.

In court Friday, Benson told Judge Peter Cahill that another bullet that tore into his left shoulder caused nerve damage, leaving him with limited use of his dominant hand.

But Benson said the longest moment of his life was when, unable to move, he called the name of his sole passenger, and she did not reply.

Justin Braeunig Porcher, the girl’s father, said even though his daughter was not struck by any of Lilly’s bullets, she continues to suffer.

“She has told me of nightmares of family dying. The one comment that truly stuck with me was that after this horrific event occurred is asking if her bus driver is OK. I feel that this has taken some of her innocence from her,” he said.

Lilly initially told investigators he shot in self-defense. But prosecutors noted in their complaint that the man had retreated to a safe spot before walking in front of the bus.

In August, Lilly pleaded guilty to a more serious charge of first-degree assault. In exchange, the government dropped the attempted murder charge.

He said his client is hypervigilant after being the victim of two separate aggravated robberies. In one of those incidents, Ramsey County prosecutors said Lilly acted in self-defense when he fatally shot 16-year-old Lavauntai Broadbent during an alleged mugging in 2015.

Plunkett characterized Lilly’s actions on I-35W as imperfect self defense. He says Lilly fired his gun when Benson put the bus in drive rather than reverse and bumped into Lilly.

“Unfortunately, Mr. Lilly misdiagnosed the situation and he overreacted based on his diagnosis of cognitive impairments,” Plunkett said.

Lilly apologized to his victims and said he inaccurately believed that the bus driver had threatened his life.

“I still have nightmares about this where both people do not survive and I still break out in cold sweat over this. I’m extremely sorry that I’ve put my family and everyone else through this,” Lilly told the court.

Judge Cahill said Lilly is not a monster, but the law requires the sentence to be decided on the facts of the case, not the defendant’s character.

“What I see is, a case where the bus is moving for less than three seconds at a snail’s pace back into traffic. And even if it did contact you, you didn’t fall down,” the judge said. “You didn’t appear to suffer any injuries. And to be perfectly honest, I find it hard to believe that that’s the time that you fired your weapon.”

Cahill sentenced Lilly to 86 months with the department of corrections. Under Minnesota law, he’ll serve two thirds of that, or four and a half years in prison, with the rest on supervised release.

Justin Braeunig Porcher, the father of the school bus passenger, said after the hearing that the sentence is far too short, and Lilly should serve decades behind bars on the original attempted murder charge.