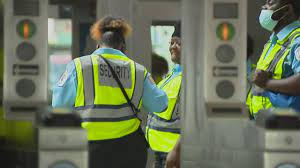 CHICAGO IL Sept 7 2022 A passenger pulling out a gun on a CTA Red Line train was caught and charged quickly thanks to added security on the trains.

As CBS 2’s Tara Molina reported Monday, we have learned the man was a convicted felon on parole.

The arrest over the weekend was preceded by a call for police response from a private, unarmed Monterey Security guard – the company that is currently contracted with the Chicago Transit Authority to help tackle the crime spike on its property.

The call for help from that guard was related to a man smoking on a train car on the Dan Ryan branch of the Red Line.

The arrest happened just after 3:30 p.m. Sunday. Authorities said a security officer asked the man – Marvin Floyd, 31 – to stop smoking on the train.

At that point, Floyd pulled a gun from his waist band, according to a proffer from the Cook County State’s Attorney’s office.

The security officer called police and gave them the train information, along with Floyd’s description, the proffer said.

Near the Sox-35th Street stop, police found Floyd sleeping on the train, the proffer said. Police patted him down, and found a loaded green ghost gun with an extended magazine on his waistband and a round chambered, police said.

Ghost guns are typically made at home and do not have serial numbers, making them untraceable.