Naked woman walks through Denver Airport asking passengers, ‘Where are you from?’ 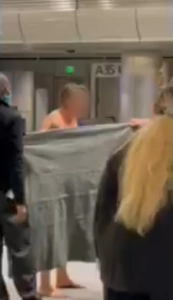 Denver CO October 15 2021 A woman paraded naked around Denver International Airport, interacting with passengers and drawing the attention of police, according to a report.

The woman appeared to be carrying some kind of water bottle as she wandered around completely in the nude, footage from a video shared with CBS shows. Police officers quickly intervened and attempted to get the woman to cover up, to which she is seen laughing and then skips away.

“How are you doing? Where are you from?” she asked bystanders who were recording her.

The video is from Sept. 19 and occurred around 5 a.m. near Gate A-37, according to Denver police.

Officers “responded and located the female running around the concourse having some type of medical issue. Paramedics were called code 10,” according to a report. “The female was transported to University Hospital by ambulance due to an undetermined medical episode.”

CBS said that while it has obtained a copy of the video, they are choosing not to release it because authorities believe the woman was experiencing a mental issue at the time.

The Washington Examiner reached out to Denver International Airport for comment but did not receive a reply by the time of publication.