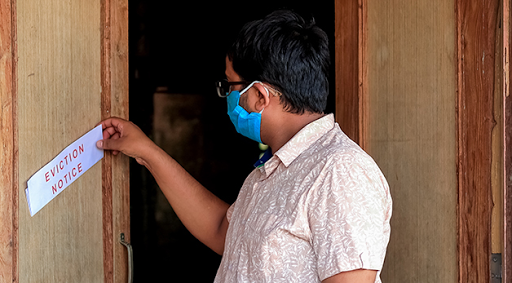 CABINET HAS APPROVED legislation that will allowed for the regulation of private security employed to assist in enforcing court orders.

In April 2019, former Justice Minister Charlie Flanagan ordered his officials to review the situation surrounding these operators, and what regulation existed, in the wake of the removal of a number of activists from a vacant property on Dublin’s North Frederick Street.

The incident saw a group of individuals working on behalf of the owner moving in to clear protesters out of the occupied building. Gardaí – whose faces were covered – also attended the scene.

The Private Security Services (Amendment) Bill 2021 now allows the government to bring the regulation and licensing of security personnel, assisting those enforcing court orders for evictions and repossessions, within the remit of the Private Security Authority (PSA).

The main provision of the Bill is the insertion of an addition category and a definition of ‘enforcement guard’ in the list of security services covered by the Private Security Services Act 2004.

This will require enforcement guards to obtain a licence to operate and ensure that they are subject to the training standards and licensing regime operation by the PSA.

“Private security staff occupy a position of trust, engaging in regular interactions with members of the public. I strongly believe that those providing security should operate to the highest standards,” Minister for Justice Helen McEntee said.

“I am pleased that with the introduction of these amendments, the Private Security Authority can continue to provide their important role in the private security industry and the contribution it makes to the protection of our community.”

The Bill will also make a number of additional amendments including allowing the PSA to refuse to renew a licence, or suspend or revoke a licence of a body corporate for the actions of its members, making the register of licensed persons available for inspection free of charge to members of the public and introduces an offence of “impersonating an inspector” of the Authority.