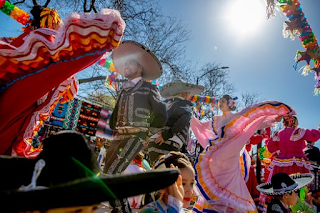 St Paul MN May 8th  2022 One of St. Paul’s signature summer celebrations is moving to the suburbs, citing skyrocketing St. Paul police costs and other new and expensive demands. Others are canceling outright.

The marching bands, the Shriners in their minicars and revelers that make up the Ramsey County Fair Parade will now line up in Maplewood on July 14.

St. Paul police security costs were estimated at nearly $15,000 this year, up from $5,000 in 2019, the last year the parade marched down White Bear Avenue, organizers said. In addition, St. Paul officials now were requiring concrete barriers for the event.

“The costs would be astronomical,” said Lisa Theis, with the White Bear Avenue Business Association, which organizes the parade.

They’re one of several St. Paul festivals and events forced to dramatically regroup or fold this year. Many cite steeply rising police costs and more city requirements as a reason on top of two years of COVID-19 disruptions and lingering public health concerns.

City leaders and police officials say they are trying to balance safety with community fun. They also are trying not to force taxpayers to supplement events.

The cancellation of the Little Mekong Night Market on University Avenue started the conversation about rising police costs.

“We just wanted the community to know why we weren’t having our event,” said Va-Megn Thoj, executive director with the Asian Economic Development Association, which put on the event. “The bottom line is we couldn’t afford security. … Obviously, that struck a nerve.”

Thoj said they spent $15,000 on police and private security in 2019. According to his group’s estimates, the cost of security could soar this year based on an anticipated peak attendance of 15,000.

Thoj stressed they want security and “love working with the police,” but it has to be something festival organizers can afford.

Surviving festival leaders say they, too, are drowning in security costs that eventually could spell their demise. Nearly all say they understand the need for security and support St. Paul police but are urging city leaders to work with them to figure out solutions to save the summer of 2023.

“Police costs were a big factor. There is a relevant conversation we’re now having in the city,” said James Farnsworth, executive director of the Highland Business Association, which ran the event. “We want to be 100 percent transparent and we want to be part of the collaborative solution.”

Farnsworth said there’s too much inconsistency around how the police are charging for services. “There is some mass confusion and the City Council needs to take control of the conversation,” he said.

Security costs for the Hmong International Freedom Festival have climbed from $79,000 in 2019 to an estimated $93,000 this year. That figure includes police and private security.

“We are very uncertain how we will be paying for it,” said Mee Vang, president of the two-day event in July that attracts 35,000.

Vang said they have asked city officials for assistance or possibly a grant. So far, they’ve been told none is available. The festival may end up raising the admission prices and vendor fees to try to offset costs.

“Public safety is our number one priority. We are not saying no to having a police presence. We need it,” Vang said.

But if security costs continue to rise, the future of the festival could be at stake, she said.

St. Paul police acknowledged costs have gone up due to changing policies. They are trying to work with events on an individual basis.

Safety standards have changed in recent years after large events elsewhere have ended in tragedy, said Troy Greene, senior commander of the police special operations unit, referencing the Christmas parade in Wisconsin last year where five people were killed by an SUV plowing through the crowd.

While before 2020 the department often provided some free services, budget restrictions and officer shortages made it difficult to staff events and respond to emergencies in other parts of the city.

Now all shifts staffing festivals and parades are considered overtime work, which officers sign up for on a volunteer basis, Greene said. Community organizers were notified of the upcoming change in 2019.

St. Paul also implemented stricter rules for off-duty officers to ensure there is a clear chain of command at events, said Ryan Murphy, commander of the special operations unit

“We’re willing to work with folks — we understand this is a heavy hit and want to work with people,” Murphy said. “But we can’t … reduce those safety standards.”

What can the city do?

City Council President Amy Brendmoen said she will convene an event security work group to ensure that security costs and other city requirements are consistent and not extinguishing community and neighborhood celebrations.

“Our role is to … try to figure out how do we keep these events safe without erring on the side of being silly,” Brendmoen said.

Brendmoen said security issues are real and they have come up at events in the past.

“When you get big groups of people together and add a little alcohol, things can get funky,” she said.

Mayor Melvin Carter issued a statement expressing support for community events and concern for the impact that security charges are having.

“These last two years have shown that our ability to gather and celebrate together is vital,” Carter wrote in a statement. “We can and will work together to ensure that dynamic events like the Night Market can thrive and grow in St. Paul.”

Organizers of another long-running East Side parade, the Payne Arcade Harvest Fest, say they also were forced to pivot due to security costs. After police said their bill would jump from about $2,500 to $11,000 following the 2019 event, planners decided to host an arts-and-culture street festival instead, said Molly LaFleche, president of the Payne Arcade Business Association.

“The cost of a parade is literally prohibitive,” she said.

Though the association’s new Solidarity Street Gallery has been a success, still drawing hundreds of people to local art exhibits in September, LaFleche said she hopes they will be able to expand in the future.

Others on the City Council have said they’re concerned about the faltering festivals.

“We need those festivals back,” Council Member Jane Prince said at a recent meeting. “They are so important to building community and a sense of engagement and safety.”

Many festival organizers said it’s been challenging to work with city officials on these issues.

Theis said her group negotiated with St. Paul throughout the winter trying to keep the Ramsey County Fair Parade in the capital city before approaching Maplewood in March. The White Bear Avenue parade has always entered the suburb for a few blocks to reach the fairgrounds, but this is the first year it won’t be in St. Paul at all.

The Maplewood Police Department is charging less for security. The price still is being negotiated but will be more in line with the 2019 security costs, Theis said. The suburban police requested a shortened half-mile parade route, but came to the table with a “we are willing to work with you” mind-set, Theis said.