No one hurt when fire engulfs armored truck 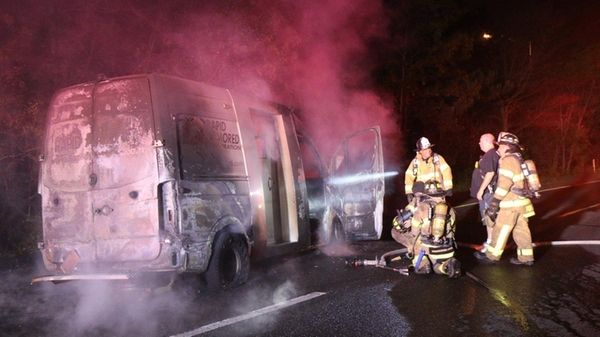 Two or three people were in the vehicle when it started burning about 10:20 p.m. on the westbound service road of the Long Island Expressway near Holbrook Road, said Ronkonkoma Fire Chief Tim Blewett.

“When we got there, it was fully involved, and they said there were coins in there,” the chief said. “We opened the back and just put the fire out. It was smoky, so you couldn’t really see what was in there.”

No one was injured, he said, and about 20 firefighters put it out in 20 minutes.

The vehicle belonged to the Rapid Armored Corp. and served as the “chase” vehicle, which travels behind a truck with money in case something happens or extra room is needed to carry money, said Robert Blumstein, the company’s night supervisor.

“The contents were of no consequence,” Blumstein said. “I don’t know what caused the fire, and the fire department responded pretty rapidly.”

He said he was trying to get more information on what happened as the armored vehicle was going from the company’s Patchogue office to the headquarters in Brooklyn.