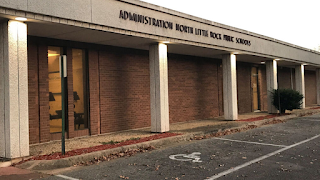 The plan is to reorganize the school district’s security apparatus, calling for the hiring of new managers to oversee school safety and certification and training for security guards.

If approved, the plan would begin to take shape in June 2023. The North Little Rock School Board gave initial approval to the plan at its meeting Thursday night. Next, the school district will present the plan to the Classified Personnel Policy Committee, which represents school staff, on Monday. Then the board will take another vote at a later date on whether to give its final approval.

For Pilewski, the plan is part of a mandate as superintendent to reform the North Little Rock School District since taking over about two years ago. In December, the school district recruited Hayward Finks, then an assistant police chief with the Little Rock Police Department, to take over as the new director of school safety, security and emergency medical services for the district.

“Under the visionary leadership of our director, Chief Hayward Finks, our proposed reorganization plan will provide a robust, proactive infrastructure to keep our students and staff safe,” Pilewski said in a statement. “This demonstrates our continued commitment that safety and security is our top priority.”

Finks led a review of the school district’s security, which included interviews with school principals, staff and teachers, concluding that the district’s policies regarding safety need updates. Notably, the report said teachers and staff agreed there is a “need for additional training and comprehension of protocols related to safety.”

“Right now, as I conducted the assessment, there are a lot of staff and security personnel that are not absolutely certain what needs to happen in a crisis situation,” Finks said.

At Thursday night’s meeting, Fink laid out Pilewski’s new security plan to the board, saying it will modernize safety in the school district with more armed guards and an information technology specialist to oversee a growing network of technology monitoring safety.

The changes will also include a reorganization of the school district security apparatus, which will include four new positions: a safety systems technician, a crisis intervention technician, security captains and security sergeants.

“Currently, we have a lot of technology that has capability, functionality that the district is not taking full advantage of,” Finks said. “So having a technology team dedicated to safety and security will help us to better utilize what we already have.”

The report also called for more security on school campuses, saying “it is overwhelmingly apparent that additional staffing is required for the efficient daily operations of the Safety, Security and Emergency Medical Services Department.”

Finks said the security captains and security sergeants will provide oversight for security officers, which the district currently lacks.

“I promise you, as the superintendent, we will come back to you and show you exactly where we reduced the operating budget,” Pilewski said.

The shooting in Uvalde, Texas, has renewed discussions around the country over gun control and school security. Pilewski brought up the shooting during Thursday night’s meeting, saying it has “drawn all of our attention to the importance of safety and security.”

Teachers and parents have also expressed concerns about safety inside and outside of schools. A recent survey the school district sent out to parents said school security was their primary concern, Pilewski said.

The school district has seen both violence near its campuses and a pandemic-induced mental health problem that has caused some students to lash out.

In October, a teen was shot across the street from North Little Rock High School’s campus while attempting to buy a gun, sending the school into a lockdown.

During a board meeting in October, district officials said there was a large increase in the number of suspensions as more students began acting out. Administrators blamed the covid-19 pandemic, social media and a chaotic national climate to a decline in the mental health of students.

“I have 11 fighting situations this year, and that is hands-down the most I’ve ever had to deal with,” Karla Whisnant, principal of the North Little Rock Center of Excellence, told the board during a meeting in October.

“That’s a number I would expect to see — maybe — in May, but never in September,” she said.