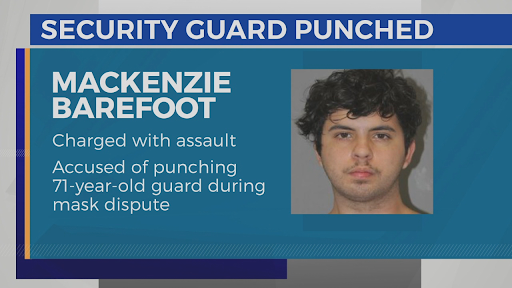 HONOLULU HI Nov 21 2021 Honolulu prosecutors charged an Oahu man with second-degree assault after he allegedly punched a 71-year-old security guard in the head during a mask dispute. His bail was set at $11,000.

According to the Honolulu Police Department (HPD), 27-year-old Mackenzie Barefoot went to a COVID testing site located at the Waikiki Shell on Wednesday, Nov. 17.

Barefoot was asked to wear a mask and show a QR code, but he refused. The security guard then had to escort him out of the area. However, HPD said that was when Barefoot got angry and apparently punched the guard in the head.

HPD reported Barefoot was charged with second-degree assault because the victim was over the age of 60. The company that the guard works for, Private Security Group, said the 71-year-old is in good spirits and ready to get back to work.