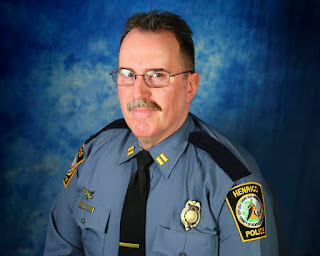 HENRICO, Va.  Feb 28 2021 As police continue to search for the driver during a deadly hit-and-run crash, officials have identified the pedestrian as a captain with the Henrico Police Department.
The pedestrian was identified as Donald L. Lambert, Jr., a 33-year veteran with Henrico police. Lambert served as the captain of the division’s special operations group. Police say Lambert was not on duty at the time of the crash.

Officials say they have a vehicle of interest at this time, and there is a collaborative effort between Hanover and Henrico police to find the driver.

Police say aerial support drones, planes, helicopters and canine units are being used to locate the driver. Officials also believe there is no threat to the community at large.

“We are deeply saddened at the tragic and untimely loss of Capt. Lambert,” said Henrico County Chief of Police, Eric English. “He was a selfless leader, mentor and friend who served our community with pride and dedication for nearly 34 years. My thoughts and prayers are with his family, colleagues and friends.”

Police responded to Greenwood and Winfrey roads at 11 a.m. on Feb. 26 for reports of a hit-and-run crash involving a pedestrian. As investigators remained in the area, Greenwood Road was closed.