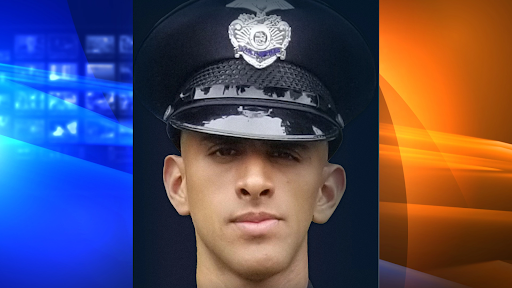 An off-duty Los Angeles police officer was shot and killed during a robbery as he and his girlfriend were shopping for a home in the Florence-Firestone neighborhood of Los Angeles County late Monday night, and five people have been detained in connection with the incident.

The shooting was reported about 9:15 p.m. near the intersection of Beach Street and East 87th Street after a black pickup truck approached the off-duty officer and several suspects got out, according to a news release from the Los Angeles County Sheriff’s Department.

At one point, the officer told his girlfriend to run away. An argument transpired and an officer-involved shooting occurred, the news release stated.

“Our officer exchanged gunfire with at least one of these suspects. We do have our officer’s gun and we have an additional weapon that we believe was responsible for this assault,” Los Angeles Police Department Chief Michel Moore said during a news conference.

The suspects were described only as three men, then returned to their vehicle and fled in an unknown direction.

Deputies responded to the location and transported the officer in their patrol car to a local hospital, where he was pronounced dead, the news release stated.

Authorities later said they had five people — three men and two women — in custody and are investigating whether a man who was found suffering from a gunshot wound a few miles from the fatal shooting is connected to the incident. None of the people detained have been booked on suspicion of murder.

Officials described the fatal shooting as a robbery gone wrong.

“He was shopping just outside the city of Los Angeles in unincorporated L.A. County for his first home with his girlfriend … gunfire ensued and he was shot and pronounced dead before he could be transported to the hospital,” Los Angeles Mayor Eric Garcetti said.

The officer was identified as 27-year-old Fernando Arroyos. He had worked at the department for three years and was assigned to the Olympic division, officials said. He was an only child and is survived by his mother and stepfather.

In a tweet showing an image of Arroyos Tuesday evening, the LAPD called the shooting a “senseless act of violence.”

“He had a promising future, a bright future that was taken away viciously over a street robbery,” Moore said.

Aerial video from Sky 5 showed a line of police vehicles escorting the officer’s body from St. Francis Medical Center in Lynwood to the Los Angeles County coroner’s office at about 5 a.m.

The Los Angeles Police Protective League issued a statement following the news of the officer’s death.

“We pray for the officer’s family, and their fellow officers, during this time of pain and sorrow,” part of the statement posted on Twitter read.

“Our hearts break over this tragic loss for our police department and our city,” Garcetti later tweeted. “I join all of Los Angeles in grief today, and I am keeping his loved ones in my prayers.”

“Last night I responded to a Los Angeles Hospital where my Deputies helped transport an off duty Police Officer who had been shot to the hospital,” his tweet read. “There is nothing more tragic and dreadful than to receive this phone call … Rest assure, our Department’s investigators are working hard to hold those responsible for this cowardly act.”

The Sheriff’s Department investigation is ongoing, and officials encouraged anyone with information to call the homicide bureau at 323-890-5500.

‹ 458 U.S. officers died in the line of duty in 2021. Only time it was higher was in 1930 › Anchorage Downtown Partnership returns to proactive model