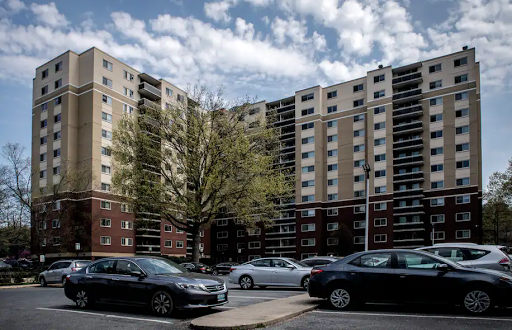 Takoma Park MD April 10 2021 Takoma Park police have charged an off-duty Pentagon police officer with two counts of second-degree murder for allegedly fatally shooting two men as they were driving away from an encounter with him Wednesday, according to charging documents.

David Hall Dixon told investigators he opened fire after three men nearly ran him over in a Lexus shortly after he found them breaking into a car, but the investigation concluded the officer actually discharged his gun after the danger had passed, according to charging documents. An autopsy showed the bullets struck the victims in the back.

“Our investigation reveals that Mr. Dixon’s overview of events was inconsistent with the facts in the case,” Takoma Park Police Chief Antonio DeVaul said at a news conference Friday. “Mr. Dixon had no lawful or justifiable reason to shoot and kill Mr. Williams and Mr. Johnson.”

Dixon is also charged with two counts of use of a handgun in the commission of a felony and reckless endangerment in the killings of Dominique Williams, 32, of Hyattsville, and James Lionel Johnson, 38, of District Heights, Takoma Park officials said.

Dixon also has been charged with attempted second-degree murder and use of a handgun in the commission of a felony in the assault of Michael Thomas, 36, who was the driver of a vehicle Dixon shot into, according to police.

The incident began shortly after 5 a.m. Wednesday when Takoma Park police officers were called to the Takoma Overlook apartments on New Hampshire Avenue for a report of multiple shots fired in the parking lot, charging documents state.

Officers found Dixon, who lives in the building, on the scene. He identified himself as a Pentagon police officer and said he was leaving for work when he noticed a Lexus without headlights driving through the complex’s parking lot, according to charging documents.

Dixon told investigators he saw one of the men associated with the vehicle attempt to break the window of another vehicle in the parking lot, officials said. Dixon reported he confronted the men in the Lexus and one of them “gassed it” nearly running him over, according to charging documents. Dixon then opened fire, hitting Johnson and Williams, police said.

The Lexus left the parking lot and Thomas drove to Prince George’s Hospital Center, where Johnson and Williams were pronounced dead, according to charging documents. Thomas was not injured and fled from the hospital but was later interviewed.

During the investigation that followed, Takoma Park police determined a vehicle had been broken into at the apartment complex, but authorities said other elements of Dixon’s story fell apart after detectives reviewed surveillance video that captured the incident.

The footage showed Dixon confronting the men at the Lexus, but he didn’t open fire until the men were leaving the parking lot and he was standing behind the vehicle, according to charging documents. Dixon fired multiple shots, the documents said.

The charging documents said the Lexus “no longer presented an immediate danger that would have justified the use of deadly force.”

An autopsy found the men were struck in their back upper bodies by the bullets, consistent with the shots being fired from behind the vehicle, according to the charging documents.

DeVaul said at the Friday news conference that Dixon had no law enforcement powers in Maryland.

“He was a civilian who acted as a civilian, who happened to be a law enforcement officer in another jurisdiction,” DeVaul said.

He added later that citizens should report crimes in progress, but not intervene: “Call us and allow us to handle the situation.”

Takoma Park police detective Charles Earle said at the Friday news conference that the department is still investigating whether the victims had a gun in their car. Authorities have no plans to charge the surviving victim.

Johnson’s family was in shock over his slaying.

She said Thursday her nephew grew up in D.C., was unmarried and loved music. He also played the drums.

“I’m just heartbroken about what happened,” she added.

The family has scheduled a news conference with an attorney for later Friday. The family plans to conduct an independent investigation of the shooting.

Efforts to reach Williams’s family members have been unsuccessful.

Dixon was being held on no bond at the county detention center Friday and he will have a bond hearing on Monday. When reached by a reporter by phone, relatives of Dixon declined to immediately comment.

The shooting marks the second time in recent weeks that an off-duty Pentagon police officer has fired their weapon.

On March 24, an off-duty Pentagon Force Protection Agency officer shot and wounded a 16-year-old whom the officer said tried to rob him on Mississippi Avenue, in the Congress Heights neighborhood of Southeast Washington, authorities say. According to D.C. police, the officer, who was not identified, told investigators that the youth pointed a gun at him. The officer tried to grab it but was unsuccessful and then pulled his own gun and fired at least one shot, according to his account.