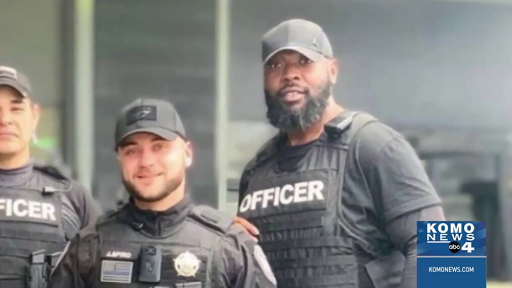 TACOMA, Wash. Jan 21 2021– When they heard it was Tracey Baker none of his colleagues wanted to believe it.

“He had gotten off early that morning, and ran to the store to get some things for his family and never made it home,” said Shavae Labine, Baker’s colleague at Iconic Global Security.

The 36 year old was a full time security guard at the private security firm as well. But he was off duty Tuesday night and shopping at the Tacoma Walmart.

“Officers were called to a business for a dispute between two males,” said Tacoma Police officer

Authorities said Baker and Jonathan Miller exchanged some words inside the store. The argument quickly spilled into the parking lot. Witnesses said Baker tried to walk away, but Miller kept egging him on until punches were thrown by both men.

By the time officers arrived the two males had been separated. Police said Baker was stabbed multiple times by Miller and died at the scene.

Dorothy Boykins is Baker’s mother. She’s now in the process of preparing his funeral.

“In order for me to live my life I got to forgive,” Boykins said. :Because what he did is on him. You might have taken away my son here on earth but you will never destroy or take away what my son left here on earth.”

And what Baker left is what’s being remembered today, especially putting others before himself.

“He was there for a lot of people when they needed him,” said Joseph Spiro, another one of his colleagues at Iconic Global Security.

A few months ago, we featured Baker’s story at the Wintonia Apartments in Seattle, where he stopped a sexual assault and cuffed the suspect until police arrived. CEO of Iconic Global Security Andrew McKellips says there were many more stories like this.

“He’s always stepped up for the little guy,” McKellips said.

And that’s why his friends and colleagues said it’s now time to step up for his family during this time of need.

Miller was arrested and faces second degree murder charge. He remains behind bars on a million dollars bail. Baker’s friends and colleagues have created a GoFundMe to try and raise money for the funeral.