Officer In Controversial Photo Removed From School Where He ‘Loved’ Working 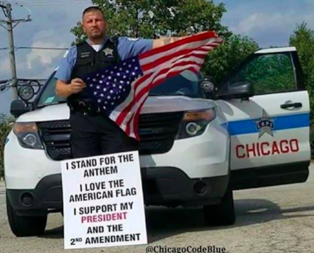 Chicago IL Sept 30 2017 A Chicago police officer who appeared in a controversial photo on Facebook said he has been fired from a security job, removed from his post at Hubbard High School and is being harassed online.

The photo shows 22-year Chicago Police Department veteran John Catanzara, in uniform, standing with a U.S. flag in front of a police cruiser and sign that  says, “I stand for the anthem. I love the American flag. I support my president and the 2nd Amendment.”

Some have called for Catanzara to be fired, citing Facebook posts from Catanzara’s personal page, while others have commended the officer.

On Wednesday, the Police Department said the officer would face a reprimand since officers are prohibited from making political statements while in uniform.

Earlier this week, two other officers were reprimanded by the Police Department when an activist shared a photo of them kneeling with raised fists while in uniform.

Catanzara has worked at Hubbard High School for years but was informed he’d be reassigned on Thursday morning.

The officer and his girlfriend also have faced harassment on social media, with people posting photos of his home and commenting on where he leaves his car, Catanzara said.

“The backlash is one thing, but removing me from the school has definitely been the toughest part of this so far,” Catanzara said.

Catanzara served as the cross country coach at Hubbard last year. In July 2016, he built a koi pond for the school in honor of Officer Brian Strouse, who was slain in the line of duty. Catanzara said he received a community service award from the Police Department for his work on the pond.

Catanzara also has traveled with members of Hubbard’s JROTC program to color guard and drill competitions in Florida, paying his own way, he said.

Catanzara loved his job at the school, said his friend, Dan Baxter, who is spreading the word about what happened to Catanzara.

“The kids losing a coach makes me sad,” Baxter said. “They don’t deserve that.”

On Wednesday, Catanzara said he was fired from Catalyst Maria, where he had provided after-school security on his personal time for two years. He was told he was fired because of “teacher backlash and parents’ concerns,” he said.

The changes came shortly after the photo of Catanzara was posted to the Chicago Code Blue Facebook page. As the photo went viral, people began sharing screenshots of Facebook posts from Catanzara’s personal page.

“Wtf its seriously time to kill these motherf—ers,” one post reads above a story about an officer being shot at Wayne State University.

“This b—- is exactly why assimilation or get out should be policy,” another post reads alongside a story of a doctor charged with performing female genital mutilation on girls. “Her hands should be chopped off!”

Catanzara, who joined the Police Department in January 1995, has been the subject of 28 complaints about his behavior as an officer, according to the Citizens Police Database Project. Nine of the complaints were sustained by the Chicago Police Board, records show.

In all, he has been suspended from duty seven times for a total of 86 days, making him among the most frequently disciplined members of the Police Department, records show.

The complaints include allegations of domestic violence, excessive force, being absent without permission and neglect while on duty.

In 2012, the Independent Police Review Authority — which has been replaced by the newly formed Civilian Office of Police Accountability — recommended that Catanzara be fired. That ruling was overturned by the Chicago Police Board, which has the final decision on officer discipline.

Catanzara has received 22 awards from the Police Department, according to ProPublica.