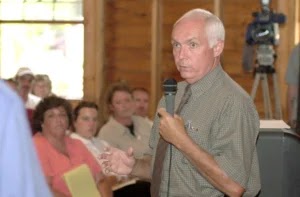 Police Chief Dana Kelley plans to retire in a few weeks after 49 years at the department and 30 as chief, Town Manager Diana Asanza announced Wednesday.

Capt. Elise Chard, a 29-year department veteran, will serve as interim police chief through the summer. The town plans to begin its search for a full-time replacement in the fall.

Kelley joined the Old Orchard Beach department in 1972 as a part-time officer. He was promoted to full time, then to corporal, sergeant and captain before becoming chief in 1992.

“I want to thank Town Manager Asanza and the current town council for all of their advice and support of not just me but the entire police department and public safety in general,” said Kelley in a statement announcing his retirement. “I also want to thank all of the extraordinarily capable police officers I’ve had the privilege of serving alongside, as well as the countless residents who have shown their support of the department as a whole throughout my time here – and especially during the height of the pandemic.”

During his tenure as chief, Kelley grew the department’s reserve and volunteer police programs. He also oversaw the creation of the town’s mobile parking payment program.

Chard, who will temporarily take over for Kelley, will be the first woman to lead the department. Chard joined the  department 29 years ago from the Lisbon Police Department. She also previously worked for the Maine Drug Enforcement Agency.

“I’ve very much enjoyed working with Chief Kelley to develop many of our department’s programs and initiatives,” Chard said. “I’m also tremendously thankful to Chief Kelley for his thoughtful mentorship, to which I owe much of the successes I’ve had in my career in Old Orchard Beach. His continued guidance in supporting me as I step forward to lead the department on an interim basis has been invaluable, and I believe has prepared me for the challenge.”