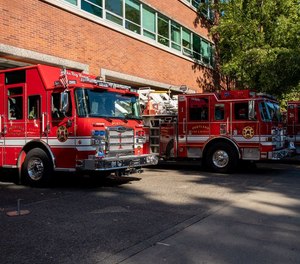 PORTLAND, Ore. October 15th 2021— The same caller would dial the 911 emergency line 30 to 40 times a month, reporting she had fallen out of bed and was unable to get up.

Each time, at least four Portland firefighters on an engine or ladder truck, along with an ambulance, would typically respond to the call. The elderly caller would be helped up and taken by ambulance to a hospital emergency department but usually not admitted.

In an effort to improve medical care for people in need, cut healthcare costs and reduce the burden on the emergency 911 system, Portland Fire & Rescue is teaming up with CareOregon to try to offer a better response.

That scenario, repeating over and over, wasn’t benefiting anyone, said Portland firefighter Lisa Reslock, who is also a registered nurse who works two days a week at Legacy Emanuel Medical Center.

In an effort to improve medical care for people in need, cut healthcare costs and reduce the burden on the emergency 911 system, Portland Fire & Rescue is teaming up with CareOregon to try to offer a better response.

On Wednesday, Portland’s City Council accepted a $2.5 million grant from CareOregon, a nonprofit that provides health insurance services to meet the health care needs of low-income Oregonians, to help fund an alternative response.

The money will support a nine-month pilot program run by Portland Fire called the Community Health, Assess and Treat Program, or CHAT. It will help fund 23 positions, including administrative jobs to help establish a new Community Health Division within the Fire Bureau. Reslock will serve as the Fire Bureau’s deputy community health administrator.

Under the new program, fire engine or ladder trucks and ambulances will no longer be sent to low-risk medical calls in downtown Portland and outer Southeast Portland.

Instead, a smaller team of two fire medics would respond to the calls and spend time evaluating what a patient’s ailment is and provide basic medical services, as well as determine if the person knows who their primary medical provider is, how to connect to their doctor, and if not, find them a medical provider.

A roving critical care nurse for each team hired by Portland Fire would be available, and the fire medics could call the nurse to respond to any location to assist.

During the pilot program set to start Nov. 15, the two-member fire medic teams would work from noon to 2 a.m., said Deputy Chief Tim Matthews, who oversees the bureau’s medical services and training.

Then, the same team of medics would check back with the patient 24 hours later to ensure the person is OK and has followed through in pursuing future care.

“We can work together and really meet the needs of a community that has not been served well,” she said. “We believe the first interaction we have with a community member who has called 911 may change the trajectory of their overall health, truly getting them the right care at the right time.”

CareOregon believes that one out of every four of its members’ emergency department visits could be managed outside of a hospital.

“This is a way to engage folks with the right kind of care so they don’t end up at the ER,” said Eric C. Hunter, president and chief executive officer of CareOregon.

“It’s a win-win for us to to work with an entity that is passionate about serving the population where they are, and then allowing us to engage our members differently so that we give better care for them and frankly are better stewards of tax dollars.”

CareOregon expects the partnership will result in a 5% reduction in such emergency department visits.

Portland Fire is sent to about 26,000 low-risk medical calls a year, or about 70 calls a day, according to Matthews. That can include people calling 911 complaining about back pain, stomach pain, abdominal problems, toothaches, falls or just feeling sick.

Instead of arriving, doing a quick assessment then handing off to ambulance medics for transport to a hospital, the new team of two firefighter medics would “actually spend time with the patient to see what their real needs are,” Matthews said.

The medics would ask the patient: “Do they have a primary care physician? Do they have insurance? Do they understand what 911 is for and how to access their healthcare system?”

The program is designed to educate patients on where to go to get the care they need, reduce unnecessary patient transports to emergency departments, free up American Medical Response ambulances to be available for cardiac arrests and other medical emergency calls, and reduce reliance on the bureau’s engine and ladder trucks so they’ll be ready to respond to fires in the city.

“When you send a big fire engine or a fire truck to a stomach ache, that’s four people and it’s a lot of resources,” Matthews said.

The fire chief said the program is intended to help transform a health care system that tends to profit off of people’s sickness.

Boone said it’s “flipping that system … where we bring care to the community and they get a say in their overall health.”

Both agencies will evaluate the new program after nine months, with the hope of extending it throughout the city if it is successful, fire officials said.

Commissioner Jo Ann Hardesty, who serves as fire commissioner, applauded the fire chief for pursuing the partnership with CareOregon.

“Chief Boone eloquently set a vision of community health when she took the helm of the bureau,” Hardesty said, “and I couldn’t be more excited to see that vision realized.”

‹ Naked woman walks through Denver Airport asking passengers, ‘Where are you from?’ › TSA firearm catches at checkpoints sets 20-year record in first nine months of 2021