Pair linked to thousands of dollars’ worth of retail thefts in Manteca, Bay Area 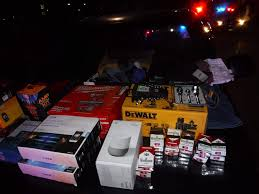 MANTECA CA Sept 11 2019— Two people arrested after making off with some $2,000 in merchandise from a Manteca department store have been linked to several other Bay Area retail thefts that resulted in thousands of dollars’ worth of losses, according to Manteca police.

Cassey Perkins and Ryan Vanostrand were arrested Thursday night after police were dispatched at about 9 p.m. to Kohl’s on a report of an organized retail theft. Kohl’s loss prevention staff told officers that the couple were inside of the store selecting merchandise and stashing it by the emergency exit doors in preparation to steal the products.

Officers staged their police vehicles in a perimeter around Kohl’s and waited for the suspects to leave the store.

Minutes later, Kohl’s alerted officers that the female suspect had left through the front emergency exit and was headed towards her vehicle, which she then drove towards the exit. The male accomplice left the store shortly afterward and allegedly threw a Kohl’s shopping cart full of stolen merchandise into the back of the vehicle.

Officers initiated a traffic stop on the vehicle and arrested both suspects.

Authorities later linked Perkins and Vanostrand to $5,000 worth of stolen merchandise from Kohl’s, Home Depot, and other stores in the Bay Area.

Perkins, 35, and Vanostrand, 36, are being held at the San Joaquin County Jail on suspicion of felony grand theft, conspiracy, shoplifting and receiving stolen property as well as a parole violation. Vanostrand is scheduled to appear in court on Tuesday in Manteca and Perkins on Wednesday.

‹ Security guard’s injuries consistent with being run over › University of Georgia employee who stole more than $1.3 million commits suicide