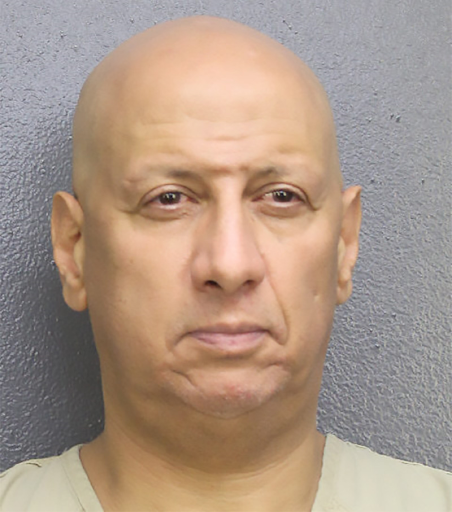 A Parkland resident was arrested on Oct. 5 after he became irate with a community security guard and snatched and smashed her cell phone, court records show.

Hamad Waleed, 54, approached the female security officer at the Watercrest community’s south gate around 9:10 a.m. Tuesday and “began berating her with profanity,” according to an arrest affidavit filed by the Broward Sheriff’s Office.

The reason Waleed was angry, according to BSO: The contractor he hired was being delayed at the gate while the security guard tried to confirm whether he was approved to enter, the records show.

Because of Waleed’s behavior, the security ofifcer said she was going to call the police. He shouted a few more profanities and started to leave the area, the affidavit states.

As Waleed walked away, the security guard used her phone to take a photo of him.

He again grew angry and moved back toward the security officer, grabbing her wrist, snatching her phone, and throwing it against the guard booth wall before leaving, according to BSO.

The incident caused about $130 damage to the security officer’s phone.

Witnesses at the scene corroborated the security guard’s account, who identified Waleed in a double-blind photo array presented by BSO, records show.

At BSO’s Parkland District Office, Waleed admitted to taking the cell phone and throwing it, according to BSO.

Waleed is charged with robbery by sudden snatching, petit theft, and criminal mischief. He has pleaded not guilty.

Waleed is not the first Parkland resident to allegedly rough up a security guard at the front entrance to their communities of million-dollar homes this year.

On Jan. 4, video surveillance caught Joaquin Pe Fagundo, 46, of the Cascata community, striking a guard.
He was arrested for burglary with assault or battery after a verbal altercation with the  Marksman Security Corporation guard turned physical.

The charges were later reduced to misdemeanor battery and trespassing, and Fagundo was sentenced to one-year probation, court records show.