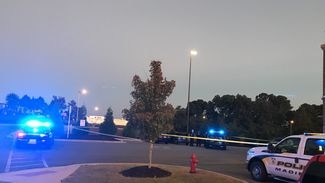 Shots rang out in the parking lot of an Alabama grocery store leaving one person dead and police on the hunt of the shooter.

The shooting at a Kroger grocery store in Madison Sunday happened at around 4pm police said.

The deadly incident happened outside the back of the store according to Madison police. The slain person’s name hasn’t yet been released.

Details about the circumstances of the shooting, which police described as an isolated incident, weren’t released.

Police did not say if the deceased was an employee of the store.