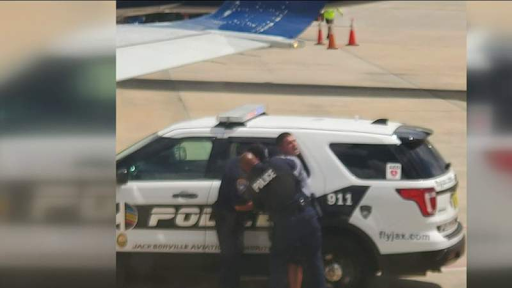 JACKSONVILLE, Fla. June 5 2021– Police at the Jacksonville International Airport confirmed Friday that an airplane passenger was arrested and the FBI is investigating the incident.

A source confirms that a couple was on board the plane with a lap child. The source said that the couple was told that the child was too old to sit in someone’s lap and that the woman agreed to take another flight, but the man became angry and demanded to be let off the plane too.

The source said the man struck another passenger and that there was an off-duty JSO officer on the flight. When the officer tried to intervene, the source said, the man slapped the badge out of her hand.

The source said the man was wrestled to the floor by other passengers and was held down for police to arrest him. A suspect was not identified by police.

As noted, the FBI is investigating as when the doors of a plane close, incidents on board fall under federal jurisdiction.

Passengers aboard the plane said they were delayed, and that the plane was a Delta flight bound for Boston.

A witness, who asked not to be identified, said she was on the flight with her husband and children.

“I have little kids,” she said. “It was unsettling. We just wanted to go on vacation.”

According to Flight Aware, which provides information about commuter airline flights, the plane was originally scheduled to take off at 12:15 p.m. It said the plane didn’t leave the tarmac until 5:10 p.m.

The plane is an Embraer 175 and can hold up to 70 passengers.

According to the Federal Aviation Administration, from Jan. 1 through May 24, there were roughly 2,500 reports of unruly passengers. The FAA hasn’t always kept a tally of those reports, but it began last year after a surge in complaints due in part to mask mandates.

In May, a flight attendant was punched in the face by a passenger on board a Southwest Airlines flight that landed in San Diego, California. That passenger was charged with felony battery.