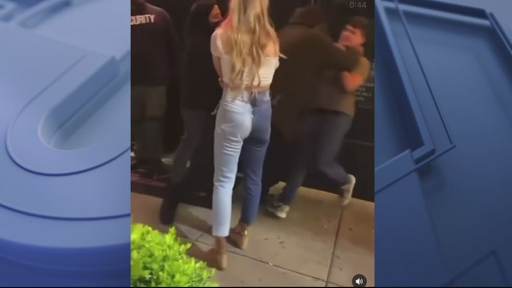 DETROIT MI June 6 2021 – Detroit police are still working through the basic facts of a fight between security guards and patrons outside a bar this weekend when a couple was shoved after getting kicked out of a bar.

Footage of the fight showed two security guards in an altercation with a man and a woman outside the Level Two Bar & Rooftop in Greektown Saturday night.

An assistant police chief told FOX 2 that DPD was unaware of the video until it was brought to their attention Monday. Initial reactions to the video stirred questions about the security guard’s response and why police didn’t intervene in the fight sooner, despite being pictured in the video near the end of it.

The video starts with a man and a security guard exchanging words before the guard strangles and throws the man on the ground.

The video also has audio of a woman next to him yelling “don’t touch him.”

As she intervenes and security tells the couple to go home, one of them shoves the woman who hits a light pole before falling down.

FOX 2 showed the video to people in Greektown on Monday, many who were dismayed by the behavior of everyone involved.

“Once they left the establishment and were outside store, I don’t think there was a reason to be aggressive anymore as long as they were leaving,” said Darnell Paton

“That was over the limit,” said Shay Pickens. “They were over the limit but when someone is drunk, you know you gotta be patient so the security guard – he was in the wrong, too.”

“Man that was uncalled for,” said Michael Gallagher.

“If that was my wife, me personally – that would make me want to retaliate,” said Donquay Thomas.

Police sources told FOX 2 the couple was kicked out of the bar, but declined to leave once they were outside. Detroit police were also at the incident for an unknown amount of time. At the end of the video, it shows officers nearby.

People we spoke with also questioned why police didn’t get involved sooner to deescalate the situation.

“If I was an officer or a man of the law, I would stepped in too and stopped it. If the situation was different and me or you put our hands on the security guard, then the police would have stepped in,” said Thomas.

Currently there’s not enough info to even suggest that officers did something wrong, according to Detroit Police Assistant Chief Todd Bettison.

Police plan to review officer’s body-worn cameras and other videos in the area to determine what exactly happened.