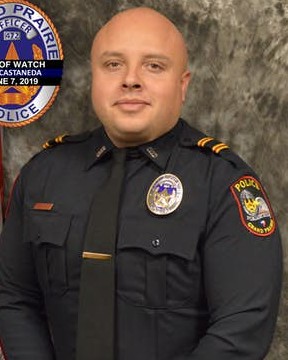 Incident Details
Cause Struck by vehicle

Police Officer AJ Castaneda was struck and killed by a vehicle while running radar on the President George Bush Turnpike, near Dickey Road, at 10:30 am.

A 17-year-old driver lost control of his vehicle and struck Officer Castaneda, throwing him off the elevated roadway. Officer Castaneda was transported to a local hospital where he was pronounced dead.

Officer Castaneda was a U.S. Coast Guard veteran. He had served with the Grand Prairie Police Department for five years and had previously served with the Tarrant County Sheriff’s Office for six years. He is survived by two children.