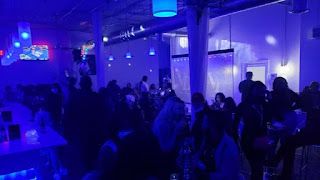 PAWTUCKET RI April 24 2021— During the first hour of Friday, the police were called to Vibe Lounge, on Broad Street in downtown, for a man who was shot five times.

Before the sun went down, the police were asking the city’s licensing board to shut the club down.

“The Pawtucket Police Department strongly believes that to allow the business to remain open is a threat to public safety,” Capt. David Holden wrote in a memo to the licensing board requesting an emergency hearing.

Police Chief Tina Goncalves, the acting public safety commissioner, declared Vice Lounge a public nuisance, she said in a news release Friday night. “The business is directly affecting the surrounding neighborhood and placing the public safety of our community in jeopardy.”

Besides Friday’s shooting, the club was the site of “numerous violations of COVID-19 regulations,” Goncalves said, adding that the shooting was the fifth “major incident” since February.

The 32-year-old victim of Friday’s shooting was treated for non-life-threatening injuries, according to a police news release Friday afternoon. He was hit in the upper body and legs and taken to Rhode Island Hospital, according to a memo made public Fridsy evening from Capt. David Holden to the licensing board.

Holden’s memo details the chaos officers confronted when they arrived at Vibe after receiving 911 calls at 12:51 a.m. for shots fired inside the club.

A second officer and a sergeant also met resistance from the guard but entered the club to find about 200 patrons and loud music.

They ordered the security guard to shut off the music and empty the club.

As the two officers moved through the club, they were told the gunshot victim was outside the North Union Street door of the building.

As the sergeant, only identified in the memo as Sergeant Medeiros, moved through the building, he noticed the officers struggling with a crowd that was yelling and screaming as the officers tried to render aid to the victim.

Medeiros requested all available officers to report to the club for crowd control, and 13 responded.

As the club emptied, the crowd outside swelled, Holden’s memo says. “The belligerent group began to taunt, yell, and scream at the officers and refused to follow lawful commands to leave the area.”

The growing crowd was overwhelming Patucket police and preventing the fire department from getting to the scene to aid the victim, who was determined to be a club patron, Holden wrote.

As officers from surrounding communities arrived, order was restored, and the crowd was cleared away by 1:26 a.m.

Holden wrote that club owners Victor and Leslie Silva were at the club during the incident.

Holden also wrote that the police looked at surveillance inside the club that he described as showing COVID-19 violations, including dancing, use of Hookah pipes and not wearing masks.

Holden and Goncalves said the major crime unit is investigating the shooting.