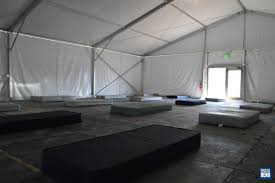 A security guard for the company Allied Universal Security, with which the City of Reno and Washoe County both have a contract, has been placed on leave after pepper spraying a homeless man at the tent structure on Fourth Street.

Aric Coward agreed to speak with This Is Reno and other local media, saying, “I don’t want somebody else to have to go through what I had to go through.”

However, RPD spokesperson Travis Warren said the incident was settled on scene because it was determined that no crime had been committed by the involved parties.

“It happened over a two-day period,” Coward said.

Coward has had three strokes and said he moves slowly as a result. He alleges that the security guard in question—whose name This Is Reno was unable to learn—harassed him about the speed with which he was getting out of bed on Sunday morning and then again on Monday morning.

On Sunday morning, Coward said, “I was on my way to church, so I got up and out of there.”

The next morning, he said he heard somebody walking and announcing that it was time to get out of bed and feared it was the same guard. When he pulled back the covers that were over his head, he said he discovered it was.

Coward said the security guard grabbed at his blanket and threw one of his shoes.

Coward said he slapped the security guard’s hand away from his belongings and then was pepper sprayed.

“So, I go completely blind—and the pain. I could not believe that stuff hurt like that,” he said.

Coward said he considers himself lucky that the incident didn’t trigger another stroke—adding that he’s willing to share his story because he believes the taxpayers whose money pays for the shelter deserve to know what happens there.

“The last [stroke] I had—it put me down. And I was never able to go back to work, and I never will,” he said. “And I grieve about that all the time because I can’t do for myself the way I used to. … I had a wonderful job. I was a truck driver. I made excellent money. OK, that’s over with because I had to go on Social Security Disability insurance. It’s a miracle I’ve been able to survive as long as I have on it. And I was hoping I could finally turn 65 next year and get the rest of my benefits that I’m not entitled to until I’m 65.”

As of Wednesday, This Is Reno learned that Coward has not returned to the shelter but has received help from locals who’ve secured a hotel room for him while a longer-term housing solution is sought.

This Is Reno contacted the City of Reno to learn what protocols are in place to investigate when an armed security guard uses force. Allied Universal Security guards at the homeless shelter—and elsewhere in the city and county—are usually armed with not only pepper spray, but guns.

City spokesperson Jon Humbert said the city demanded the guard be removed from duty at the shelter and is looking into the matter further.

“Since the city has learned of the incident, RPD investigated what happened and found that no crime occurred on any side,” Humbert said in an email to This Is Reno. “However, that doesn’t mean this conduct was appropriate. The City of Reno required the contractor to remove this guard from any and all facilities related to the unsheltered population immediately. Allied may take additional sanctions as they deem fit.”

Humbert said city staff have been working on addenda to the contract with Allied Universal “to focus on protections and policies specifically for our unsheltered facilities and population.”

He said staff will be meeting with Allied Universal leadership soon to review the incident further.

“These residents deserve safety and protection like anyone else in our community,” Humbert said. “No one should be targeted or treated differently because they need city assistance.”

Some Reno Police officers have also been accused of harassing and threatening homeless individuals, including earlier this year during a homeless camp cleanup near Wells Avenue. The city did not admonish their actions and refused to say if the officers were held to account.

Allied Universal Security is one of the largest private security companies in the nation—and its security guards have been the subject of much controversy as a result of their use of force over the years. Allied Security Guards have grievously wounded or killed citizens in multiple states in recent years, including in Florida, California and Colorado.
ThisisReno