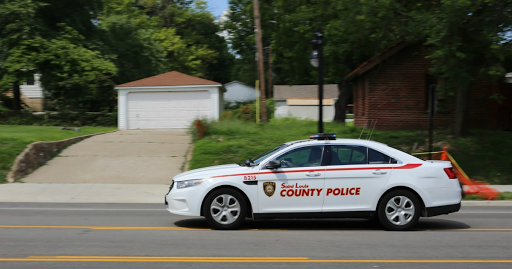 The officer wanted to speak to Outen’s 15-year-old daughter Paris about a failing grade at Ritenour High School, which she is attending virtually for her sophomore year.

“Why is it necessary for you to have a gun to talk to my daughter about grades?” Outen recalled asking him. “A failing grade in a class is not an emergency to warrant police presence.”

School districts across the U.S. have reported the number of students failing classes has doubled or even tripled during the coronavirus pandemic, particularly in schools that have moved online. In response, some schools have changed grading policies, given students more time to complete assignments and ramped up outreach efforts.

Sending a police officer to a student’s home was an unnecessary escalation, said John Bowman, president of the NAACP St. Louis County, where Outen works in public relations.

“It appears in the Black community, there’s an extra need to show intimidation or act as if you fear being in our presence,” Bowman said. “I am unwilling to accept the intimidation and over-policing of a child on a minor issue such as a grade.”

Police officers from St. Ann, St. John and Breckenridge Hills who work as resource officers in the Ritenour School District serve on “wellness teams” that include social workers and counselors. The teams work in pairs to visit the homes of students who have been flagged for chronic absenteeism, academic issues or behavioral problems. During virtual learning, the number of home visits has increased significantly, to 1,500 since August.

“We have seen a decline in student performance, and we’re using this wellness team as a strategy to try to connect kids to school,” said Ritenour Superintendent Chris Kilbride.

A woman who accompanied the officer in his patrol car was a school counselor, Outen later learned, but the woman did not identify herself nor speak during the visit. After they left, Outen cried and hugged her daughter.

“Especially as an African American child in St. Louis County, my goal is to protect her from these sorts of threatening situations,” Outen said. “I don’t want my daughter to equate education with fear, and unfortunately that’s what happened.”

Outen said the experience was especially disappointing for her as a graduate of Ritenour High.

The district will no longer send officers on academic-related home visits, Kilbride said Tuesday. Outen, Bowman and district officials plan to meet later this week to discuss other changes to the program, such as providing advance notice for home visits.

“Clearly this was a traumatic experience,” Kilbride said. “The question is how to do the investigation of what happened and how to do this differently moving forward.”

Parent Michael Wright said he appreciated a visit Tuesday from a Ritenour High counselor, because he hasn’t been able to closely track the grades of his two sons in ninth grade.

“My children are not doing well and we need to help them do better, to have every chance to not have bad grades reflect a bad year,” Wright said.

Grades have also fallen among students in the Ferguson-Florissant School District who have not been inside their classrooms since March. Last month, teachers rejected a proposal from students, families and school staff to adjust the grading scale for the spring 2021 semester to 40%-59.9% for a “C,” 60%-79.9% for a “B” and above 80% for an “A.” Any student with a grade below 40% would have been allowed to raise it with makeup work.

Teachers are now working on an alternative plan to improve student performance during virtual learning. The challenge comes with grading students while acknowledging the added stressors of the pandemic, said district spokesman Kevin Hampton.

“We don’t want to penalize students, but we also know it doesn’t necessarily help students to give them a better grade if they move on and they haven’t learned the content,” he said.

One option might be expanding the use of standards-based grading, which scores a student’s mastery of curriculum standards instead of awarding points for participation or turning homework in on time, Hampton said.

In Parkway schools, “F” grades given in district high schools climbed to 6% of all grades in the first quarter, compared with 3.5% in the pre-pandemic third quarter of the 2019-2020 school year. Failing grades among freshmen nearly doubled to 8%.

The increase of “D” and “F” grades was “not dramatic, but for those students has a very real impact,” said assistant superintendent Kevin Beckner at last month’s Parkway School Board meeting.

BYU will keep its police department, after a judge dismisses Utah’s decertification efforts