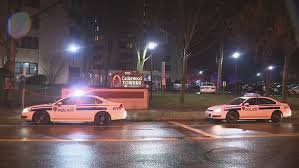 Police were called to East Main Street near Jersey Street around 10:30 p.m. Tuesday for the report of a shooting.

According to police, an on-duty security officer at the Cedarwood Towers Apartment complex was addressing a report about an unruly tenant made by other tenants in the complex.

The security guard, whose name has not yet been released, confronted Thomas in the lobby of the complex.

The situation escalated between Thomas and the security guard until, in the parking lot of the complex, it became physical.

Thomas was taken to Strong Memorial Hospital and died there a short time later.

Police have a suspect in custody. No one has been charged.

An area near Cedarwood Towers was blocked off for several hours as they investigated, but the area has since reopened.
WHAM