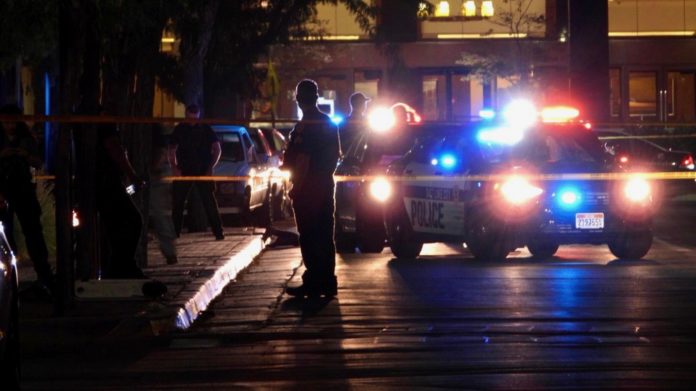 When police arrived they found a gravely wounded man lying face down in the doorway of the club.

Witnesses told investigators the man had been in the club earlier in the evening, only to leave and come back through a side door. Once inside, he allegedly pulled a gun and began firing into the ceiling.

Valencia said as people fled the bar a security guard spotted the suspect taking aim at a patron. The guard fired at least one shot, mortally wounding the gunman who staggered to the club’s doorway and collapsed, Valencia said.

Valencia said a Salt Lake City police sergeant was attempting to perform CPR when he was assaulted by two bystanders. Fellow officers subdued the men who were taken into custody. The sergeant sustained minor injuries, according to Valencia. No one else was reported hurt.

What exactly triggered the shooting had yet to be determined.

“There are still a lot of unanswered questions,” Valencia said.

Witnesses said the club was packed at the time of the shooting and that dozens likely saw the deadly incident take place.

Friends of the suspect remained on scene and were described as distraught.

Valencia said crime scene investigators had been called in and Pierpont Ave. would be closed between 200 West and West Temple for several hours.

More than two dozen police officers and emergency medical personnel responded to initial calls for help after the incident was reported as an “active shooter” situation.