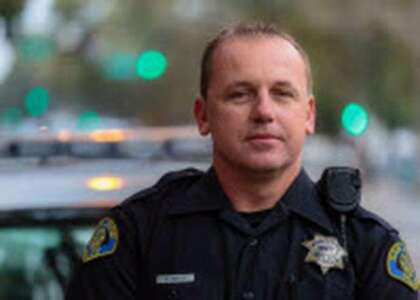 Robert Foster, 47, the Morgan Hill owner of Atlas Private Security, self-surrendered on Thursday and will be arraigned on Nov. 30 at the Hall of Justice in San Jose on felony charges.

His San Jose-based company offers security guards and polygraph experts and contracts with Bay Alarm, Applebee’s, and the Fremont Unified School District, as some examples of clients.

Foster and his accomplices, including his wife, Mikaila Foster, allegedly used his position as an active-duty San Jose police officer and self-described expert in lie detection to further their business interests, prosecutors allege in a 45-page complaint.

Foster allegedly failed to disclose to SJPD that he owned and operated Atlas or that such ownership could result in ethical conflicts, prosecutors say, although that information is publicly available.

The six-month investigation revealed that Foster allegedly hid about $8 million in payroll over three years, avoided nearly $600,000 in tax liability and $560,000 in insurance premiums, authorities allege.

According to prosecutors, Foster and the others allegedly reduced insurance premiums and taxes by reporting false and inaccurate payroll, underreporting headcount, paying employees off the books, and underreporting employee injuries. In all, Atlas employees allegedly laundered approximately $18 million since 2015. In other words, Foster used subcontractors illegally, trying to hide the number of security guards he really employed, thus reducing the unemployment insurance he was supposed to pay as well as his worker’s comp premiums.

And not only that: Once, an employee was allegedly threatened with deportation if she continued to speak attorneys about her rights under worker’s compensation laws after suffering a workplace injury, prosecutors allege.

Prosecutors also allege that to keep the scheme secret, Foster and several of his co-defendants discouraged overworked employees from identifying themselves as Atlas employees when seeking medical care for on-the-job injuries, or from seeking workers’ compensation benefits.

Efforts to reach Foster and his attorney, Nelson McElmurry, were not immediately successful on Friday. A man who answered the phone at his company said he wasn’t at work, but promised to let him know a reporter was trying to reach him.

San Jose Police Sgt. Enrique Garcia told KTVU that  Foster was placed on administrative leave in March once the department was made aware of the criminal investigation. Garcia would not answer any questions, including whether the chief has moved to terminate him. He referred all other questions to the District Attorney’s Office.

Foster was one of several officers involved in the deadly 2013 shooting of Ronald Aududdell, who was out on parole and had just broken into parked cars to steal wallets. He also allegedly drove his car into Foster’s, according to prosecutors. A chase ensued, and Foster told his colleagues that he believed Aududdell was armed with a handgun when he ended up getting boxed in by police and eventually getting out of his vehicle. Documents reveal, however, that he was unarmed.

The shooting was deemed justified by District Attorney Jeff Rosen.

“This office will root out and prosecute anyone – whether they wear a badge or not – taking criminal advantage of workers,” Rosen said in a statement. “Our new task force will protect and heal the victims of labor trafficking, wage theft and illegal exploitation and raise awareness about how these insidious crimes are attacks on our communities of color.”

This is at least the second public scandal to hit the San Jose Police Department this summer.

Four officers were placed on administrative leave at the end of June while Internal Affairs investigates racist and anti-Muslim comments made in a private Facebook group reportedly for current and former San Jose officers.

Man defrauds Lowe’s of more than $183,000 with fake credit cards