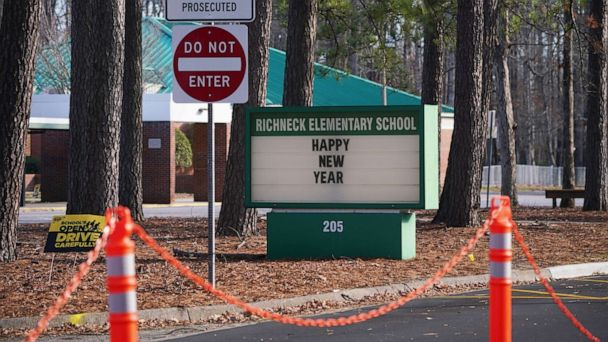 In a town hall meeting with parents, a Virginia school district superintendent said that the backpack of a 6-year-old student who shot a teacher in a classroom was searched before the shooting.

Newport News Superintendent Dr. George Parker III said the boy accused in the shooting arrived to Richneck Elementary School late in the morning of Jan. 6, and that his backpack was searched after someone reported he may have had a weapon.

The person who searched the child’s bag didn’t find a weapon. A few hours later, 25-year-old teacher Abigail Zwerner was shot. The school district did not say who searched the boy’s bag or how the tip about the weapon was received.

Newport Police told ABC News, “we have determined through our investigation that a school employee was notified of a possible firearm at Richneck Elementary before the shooting occurred. The Newport News Police Department was not notified of this information prior to the incident. I cannot release any further information at this time because of the ongoing investigation.”

The 6-year-old is accused of shooting Zwerner with a 9mm Taurus pistol in an “intentional” act, police said. She was initially hospitalized with life-threatening injuries.

The school district said it will install metal detectors in every school.

The Newport News School Board said the first walk-through metal detectors for all students, faculty, staff and visitors will be installed at Richneck Elementary, board chair Lisa Surles-Law said during a press conference.

The school board said it will purchase 90 walk-through metal detectors which will be put in every school across the district.

Surles-Law said a decision has not been made on when Richneck Elementary will reopen.

In addition to “state-of-the-art detectors,” the district will bolster protocols on handling school violence, including implementing a safety stand down and reviewing student conduct and discipline records, Surles-Law said.