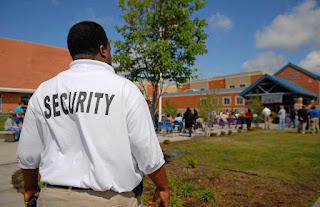 A school security guard was fired and arrested after surveillance video showed him grabbing a student and throwing him to the ground, according to the school principal and court records.

Alie Joseph worked as a security guard at the Youth Under Construction Youth Center, a private school for at-risk youth in Pompano Beach, until last week, according to Delvin King, the school principal.

Joseph tried to confiscate a 15-year-old student’s cellphone and then pulled the student out of his seat and threw him to the ground, King said. The school principal said he witnessed part of the encounter and called the Broward Sheriff’s Office.

Joseph was charged with two counts of battery and openly carrying a weapon without a license, all misdemeanors, records show. He was released from the Broward County Jail on $1,000 bond.

Joseph could not be reached for comment, and court records did not show information for his attorney.

Joseph told a sheriff’s deputy that the student wouldn’t listen to his commands, so he grabbed the student by his arm and lifted him out of the chair, according to an arrest report. He then pushed the student into the principal’s office and knocked him onto the ground, the report says.

King said he was so disturbed by what he saw, he canceled his school’s contract with the company, State Line Protection Services.

“I was in total shock. I just couldn’t believe that someone, especially that’s in our culture, in Black culture, would treat our students like animals,” he said. “This is nothing I stand for at the youth center. This is nothing I would allow.”

King said Joseph had no previous complaints against him. King referred additional questions about the guard to that State Line Protection Services.

Reached by phone, a man identified himself as the owner of State Line Protection Services but declined to give his name. He said the video did not show the entire encounter, saying the student was physical with the guard in the hallway before they were seen on camera. He declined to comment further, saying he wanted to wait until the investigation was complete.

The student, whose name is redacted in an arrest report, told deputies that the earlier encounter was also provoked by Joseph when he grabbed the student by his arm and pulled him out of a classroom.

The student who appears in the video was not identified. King said he retrained his staff on deescalation techniques to prevent this from happening again.