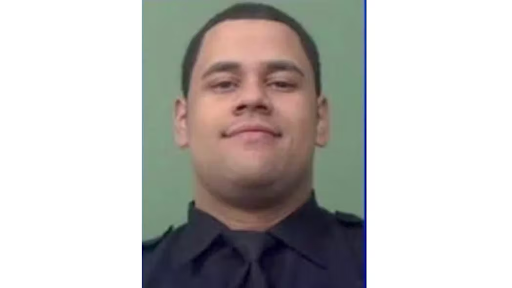 “It’s with great sadness I announce the passing of Police Officer Wilbert Mora,” Sewell said in a statement. “Wilbert is three times a hero. For choosing a life of service. For sacrificing his life to protect others. For giving life even in death through organ donation. Our heads are bowed & our hearts are heavy.”

The young officer had been on life support since Friday evening after he and fellow Officer Jason Rivera, 22, were shot inside the apartment of a woman who called 9-1-1 because she’d been fighting with her son.

McNeil had come from out of town to visit his ailing mother, who had recently undergone heart surgery and had a stent inserted. But mother and son argued from the start of his visit, she later told police — about the anti-government podcasts he listened to, about his hatred of cops and even about his vegan diet.

She also said she was aware her son had a gun but made it clear to him, she didn’t want any weapons in her apartment.

When she called for help at 6:15 p.m. Friday, she denied her son had hurt her and gave no indication he was armed.

The trio of officers, after responding to seemingly more pressing jobs, went to her apartment on W. 135th Street.

The job at first appeared to be like other domestic disputes officers respond to and resolve peacefully without an arrest. But when McNeil ignored his mother’s call to come out front so police could talk to him, the tensions heightened.

Sulan stayed behind with the mother and another son, while Rivera and Mora headed down the 30-foot hallway toward the bedroom.

McNeil shot Rivera first, police said. As the young officer fell backward, his body-worn camera pointing to the ceiling, McNeil stepped over him and fired at Mora before Sulan returned fire, hitting McNeil in the right arm and head.

Responding officers carried their wounded brothers out of the building and rushed them to the hospital, where Mayor Eric Adams later said it is ”our city against the killers,” and Sewell lamented she was “struggling to find the words to express the tragedy we are enduring.”

McNeil was on probation for a New York City drug conviction from 2003, police said. He also had multiple out-of-state arrests on his record, including for gun possession in South Carolina in 1998, a case that was later dismissed. He had been arrested three times in Pennsylvania, for assaulting a police officer in 2002 and twice for drugs the following year, police said.