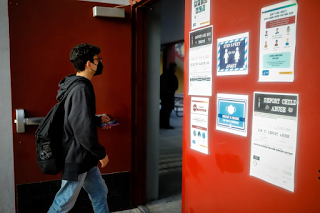 Miami Dade County FL Sept 10 2021 At least 13 employees of the Miami-Dade County Public Schools have died from complications of COVID-19 since Aug. 16, according to district officials.

Those who died include teachers, school bus drivers, a security worker and a cafeteria manager.

“It is a big number. It is a bruising statistic that we need to absolutely internalize,” Miami-Dade school Superintendent Alberto M. Carvalho told NPR’s Here & Now.

According to the president of United Teachers of Dade, Karla Hernandez-Mats, all of those who died were African American and unvaccinated.

Carvalho said that while the district is blocked by law from requiring employees to be vaccinated against COVID-19 or even asking whether they are vaccinated, he is urging people to get the shot.

“This sad statistic underscores the impact of misinformation and disinformation efforts through some vocal entities, who quite frankly profess anything but scientific reality,” Carvalho said. “The outcome, the consequence is the death of individuals, and that’s just not acceptable.”

The school system — which is the fourth-largest district in the country — will try to increase the vaccination rate among staffers by offering $275 to any employee who shows proof of vaccination.

Carvalho said that among the 13 deaths, the majority of people contracted COVID-19 and died before the beginning of the school year. One person had direct contact with students, he said.

Miami-Dade students returned to the classroom on Aug. 23 with a requirement that they wear masks as a spike in infections and deaths has continued to plague Florida.

The mask mandate was a violation of an order signed by Florida Gov. Ron DeSantis barring schools from requiring that students wear face coverings and leaving that decision to their parents.

DeSantis has withheld funding from two school districts that violated his order, but Carvalho said that Miami-Dade had not yet lost any money.

The district has an online portal that tracks COVID-19 cases among its employees and staff, and it is continuing to urge all of those who are eligible to get vaccinated.